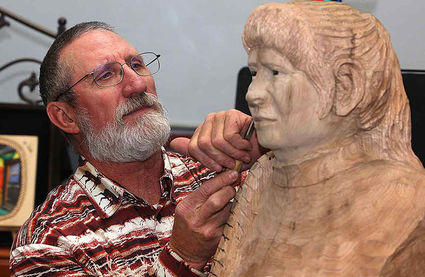 FACE CHISELING – Tom Collins of Plains works on a two-foot tall head and shoulders wood likeness of his wife, Terry, during the Artists in Paradise show at the Paradise Center. Collins was one of a dozen artists to participate in the three-day event in Paradise.

A dozen artists from Sanders County gathered for the 5th Annual Artists in Paradise exhibition at the Paradise Center last week.

"It was a great time for the artists and the people that came," said Karen Thorson, president of the Sanders County Arts Council, the nonprofit organization that sponsored the event last Thursday, Friday and Saturday in the center's auditorium. Thorson said that about 300 people attended the exhibit, including visitors from Missoula, Kalispell, Polson, and even some from outside Montana.

The exhibitors showed a wide range of art: photographs, paintings, jewelry, glass, ceramics, wood, and rock, and went from inch-long earrings by Liz Smith of Trout Creek to a 40-by-48-inch painting of an Alaskan caribou by Ilene Paulsen of Plains.

This was the second year for Paulsen, who had acrylic and watercolor pieces at the show. It was Paulsen who joined forces with Plains artist Rick Harter to paint murals on the wall of Garden Gift & Floral in Plains. Harter, who has been a participant in the Artists in Paradise all five years, also had a variety of watercolor and acrylics for the exhibit.

"The show went well and we were busy all three days and got a lot of positive feedback," said Thorson of Art Studio 376 of Plains. Thorson, who coordinates the event each year, had four 30X40 acrylic paintings and a mixture of fused glass art.

This was the first year that all the artists were set up in the auditorium; in the past, some were outside and others had their booths in the schoolhouse. Also new this year was a booth to feature the children who took art classes at the Paradise Center as part of Kaleidoscope Summer Arts Camp. Children from ages 5-18 participated in the classes and showed more than 50 pieces of artwork at the show.

This was the first year for Thompson Falls artist Dianne Zimmerman, who had numerous pieces of her alcohol ink art, a medium that she's been doing for about a year. She also had painted tiles and jewelry. Also from Thompson Falls for the second consecutive year was Andrea Fernandez with her 3-D "touchable" multi media pieces and her acrylic poured paintings.

This was the fifth year for Trout Creek resident Liz Smith and her "Rocks by Liz" art, which included jewelry, copper goods, rock pieces, and an eight-foot long rain chain, which hooks to a house rain gutter.

Orvall Kuester and Cheri Seli, both of Plains, once again showed their photographic skills with pictures of animals, people and wildlife. Kuester even had a photo of an aircraft dropping retardant on a 2000 fire along Highway 28. 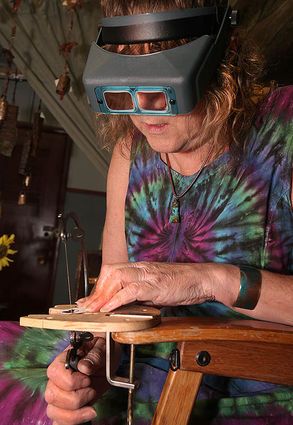 TINY ART – Liz Smith works on a cat earring during the Artists in Paradise show at the Paradise Center.

Plains resident Ellen Childress and her Whistle Creek Pottery had more than 100 pieces of "functional" art: cups, bowls, plates, piggy banks, and "possibility cups," which could be used for whatever – change, rings, pills, etc.

The only artist to demonstrate his work was Tom Collins of Plains, who was working on a head and shoulder bust of his wife, Terry. As of Saturday, he had about 60 hours into the two-foot high piece. Collins was the only artist who wasn't selling his pieces. Instead, he wanted to highlight the works of members of the Plains Wood Carving Club. The pieces on display included carvings from Collins, Cheryl and Dennis Burt, Brad Stacey, and Darrell Sorenson. The club meets on Tuesdays from 6:30-8:30 p.m. at Studs Building & Home in Plains. Collins said there are about a dozen members.