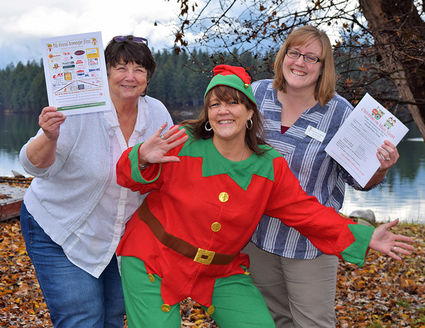 The holiday season is once again upon us. The clock is ticking and there are only a couple weeks left until Christmas on Main Street kicks off. Thompson Falls will be bustling with activity Saturday, Dec. 1, rejoicing this year's theme, "Christmas in the Old West.

"It takes a village," stated Danielle Wood, Christmas on Main Street event organizer. "All these events can be organized, but what make a successful event is community participation," she said with enthusiasm.

The Falls Chamber will once again be organizing a Scavenger Hunt, beginning Nov. 15 at their monthly meeting. Everyone is welcome to attend the meeting, scheduled for noon at the Rimrock, where an elf will be distributing entry punch cards. Completed cards, receiving punches from local businesses, can be turned at Thompson Falls Public Library or The Sanders County Ledger through Nov. 30. After that date, entries can be submitted at the Old Jail Museum on Dec. 1, no later than 6 p.m. The winning scavengers will be selected at the post-parade musical being held at the Rex. A total of $900 in Chamber Bucks will be awarded with a grand prize amount of $400 and smaller $25 awards.

Youngsters up to age 12 are encouraged to show their artistic abilities in a holiday coloring contest. Forms will be distributed at both Thompson Falls and Trout Creek elementary schools, the Thompson Falls Public Library and The Sanders County Ledger, and they can be submitted to these same locations upon completion. The deadline to enter is Nov. 28. Simple Simon pizza certificates will be awarded to the top artist in the 0-5 age group, 6-8, 9-10 and 11-12. Winners, need not be present, will be announced at the Rex musical following the parade.

Come December 1, the big day, Joanne Burk, parade coordinator is hoping to top last year's parade record of 30 participants with 50 entries. "This is a great way to advertise your business for free," Burk stated. She added that not every entry needs to be a float, it could be something as simple as walking.

Every parade entrant will be entered in a random drawing sponsored by the local Men's Prayer Group, who will select five $100 winners. In addition, prizes will be awarded to the "Brightest Entry," entry with "Best Costumes," and "People's Choice: Best Overall" following the "Christmas in the Old West" theme. Ballots will be distributed during the parade for public vote. Collection boxes will be located at Realty Northwest and Minnie's Café. These winners will be announced Monday after ballots have been counted.

The deadline for parade registration is 5 p.m. November 29 and parade line-up takes place December 1 at 6 p.m. with the parade commencing at 6:30. Burk asks anyone interested in the parade to contact her at 827-6225.

The Chamber is happy to announce that there will be two sleighs this year. One will transport Santa, who is trying to arrange for the Mrs. to join him. And the other sleigh, said to be "all jazzed up for 2018," will carry Grand Marshalls, Rita Lundgren, Kathy Conlin, Linda Rocheleau and Robin Hagedorn (will not be riding on the sleigh as she must administer event functions). The four ladies were chosen for their exemplary volunteer service on the Beautification Day Committee, leading to community improvements.

As has been the case every year, the Men's Prayer Group will be hosting a pre- and post-parade social outfitted with hotdogs, chili, hot cocoa and cider. Everyone is welcome to attend the free event on Main Street.

Following the parade, The Rex doors will open at 7 p.m. for a holiday musical and variety show. Jan Manning has organized for music, bells and a magician to entertain attendants for a one-hour show.

The Chamber, who is responsible for hanging wreaths along Main Street creating a festive ambiance, would like to extend a thank you to NorthWestern Energy for putting up the holiday lights and candy canes and Blackfoot Telephone Cooperative, Inc. for hanging winter banners. They also thank Lynette Elliott for assembling the nativity scene, which had a little maintenance in the form of paint and minor repairs performed by Wood.

To add holiday cheer to Main Street this year, the Chamber is asking businesses in the event area to participate in lighting, window decorating and any other festive décor adding holiday cheer. Of those who participate, three will be selected as Main Street Civic Award winners. Businesses are not required to register, the only request is to have decorations up by December 1.

Thompson Falls Main Street organization and Chamber of Commerce look forward to hosting the community this holiday season in another fun-filled Christmas on Main Street. The Chamber can be contacted for more information at 827-4930.