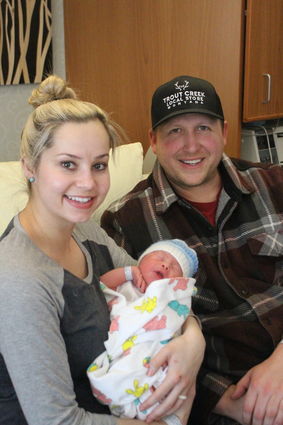 PLEASANT SURPRISE - Chelsea and Tom Kirkland were on their way to Missoula when baby Casen Lawrence decided to make an early appearance. Casen was the first baby born at Clark Fork Valley Hospital in Plains this year.

The first baby of the year at Clark Fork Valley Hospital was a bit of a surprise for the hospital staff. Tom and Chelsea Kirkland also were a bit surprised last Thursday when their son Casen made an early arrival.

This is the first baby for the Kirkland family. Chelsea's due date was Saturday, Jan. 26. She had an appointment in Missoula on Thursday, Jan. 24. Her doctor said everything looked good and she still had some time. In fact, they told her they would probably induce her on Monday, Jan. 21.

Baby Casen had his own plan, though. Thursday evening just before 6, after Tom and Chelsea had returned to their home up Prospect Creek, Chelsea started having contractions. Tom said they weren't in that much of a hurry, so they got their things together, shut down the fireplace, and headed to Missoula to check in with their doctor. About Eddy Flats, however, Chelsea began to think they might have to change their plans. She said she felt the need to push, and they made the decision to stop at Clark Fork Valley Hospital in Plains.

Casen arrived about 12 minutes after the Kirklands arrived at the hospital, measuring exactly 8 pounds and 21 inches long.

"We are lucky this hospital is here," Chelsea said, noting that the doctor was on call and didn't even have time to arrive at the hospital before Casen made his debut. The hospital emergency staff went into action, delivering their first baby of 2019. The couple was surprised that Casen was the first baby of the year, being so late in January.

"I'm still just in shock," Chelsea said. "It is so exciting and amazing." She said the delivery went smooth. With Casen's speedy arrival, there wasn't time for medicine, and Chelsea missed out on long deliveries she has heard stories about. "With the first baby, the doctor said not to worry and not to come in if contractions were more than 10 minutes apart." She said she had a couple contractions at home, and then when they were in the car, her contractions were 4-5 minute apart.

"It was just weird that we had a checkup and they didn't think she would be this close," Tom said. "We barely made it."

Casen is named after one of Tom and Chelsea's friends, and his middle name is in honor of Larry McKenzie, a close friend of the family. "Larry pretty much adopted me," Tom said.

The Kirklands own Big Bull Sports west of Thompson Falls, and Chelsea started work at First Security Bank in Thompson Falls. Both Tom and Chelsea complimented the staff at First Security Bank for hiring a very pregnant Chelsea and allowing her time off for appointments even though she was new to the bank. "They have been really great to us," Chelsea said.