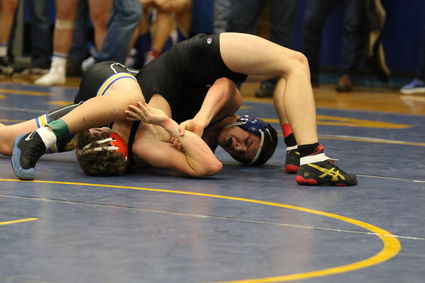 PRETZEL LOGIC - Blue Hawk grappler Dakota Irvine has his opponent in a compromising position during 182-pound semifinal action at the Western B-C divisional tournament in Thompson Falls Saturday. Irvine and three other Hawk wrestlers will be competing in the State B-C tournament in Billings this weekend.

Four Thompson Falls Blue Blue Hawk wrestlers survived Saturday's Western B-C tournament by placing in the top four in their weight classes, and now move on to the State B-C tournament, part of the Montana All-Class meet to be wrestled in Metra Park in Billings Frid...