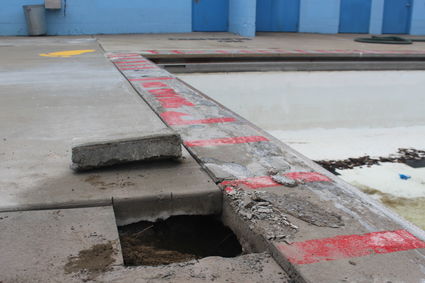 SAFETY ISSUE - Holes up to 8 inches deep were discovered under the decking surrounding the Thompson Falls Pool. The city has decided to not open the pool while the necessary repairs are completed.

At the Thompson Falls City Pool, safety of visitors and staff is the top priority, Public Works Director Neil Harnett said. With that, the city has decided to keep the pool closed this year so necessary repairs can be done to the pool and surrounding deck area.

"I can't see safely using the pool before this is fixed," Harnett stated.

When city staff checked on the pool early this spring, they noticed that the concrete deck surrounding the pool had settled several inches. Harnett said he has never seen the settling to that extreme. He said that every place there is an expansion joint in the concrete, water has eroded the dirt underneath and caused large holes to appear below the concrete. The city staff cut out a piece of concrete at one of the expansion joints and unearthed a 14-inch hole that was about 8 inches deep. Another hole appeared inside the pool this spring. Harnett said the biggest safety issue is the deck caving in and someone getting injured.

The city had already secured funding to do a remodel of the plumbing and bathrooms at the pool later this year. When the safety issue was discovered, the decision was made to close the pool and complete the necessary repairs and the remodel project. Harnett said the potential start date for the project is June 1. Repairs will take at least four weeks. The pool season is only 10 weeks. Harnett said if repairs are ahead of schedule and at least six weeks are left in the season, they may open the pool. However, he warned people that it is likely the pool will be closed all season.

The pool damage is primarily caused by issues with the pool plumbing. Harnett said that as much as 17,000 gallons of water a day has leaked from the pool plumbing in the past. The plumbing and deck repairs will prevent that, saving the city water and money.

To complete the repairs, the pool will be filled with water. The existing concrete will be removed, the plumbing repairs made, and a new concrete deck placed. Harnett said a renovation this scale has not been done at the pool for about 15 years, when the inside of the pool was sandblasted and repainted. That year, the pool was also closed for the season. 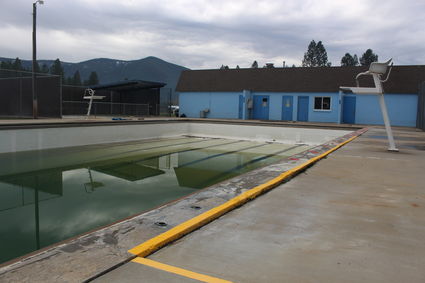 GROUND UNDER REPAIR - The Thompson Falls pool will not open this year as the pool undergoes needed safety improvements.

Other improvements in the summer project will include new portable lifeguard chairs, a new diving board and pool cover, new fencing and new shower stalls in the bathrooms.

While grants have been secured for much of the $150,000 project. A $75,000 grant was awarded from Montana State Parks earlier this year, and the city will match those grant funds. For the matching funds, the city has secured $25,000 from the Frisbee Morbella Foundation, $5,000 from the Oddfellows and $5,000 from Blackfoot Telecommunications. An additional $40,000 will come from the capital improvements fund, City Clerk Chelsea Peterson said.