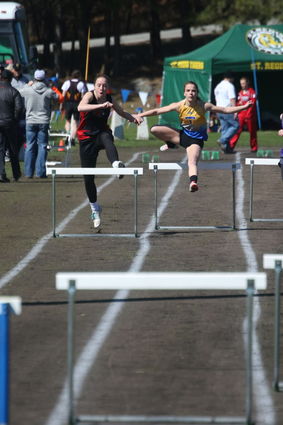 HURDLING TOWARDS the finish line, Elena McAllsiter of Hot Springs and Kacey VanZanten of Thompson Falls compete in the 300 meter hurdles at Previs Field last week.

Make your marks while the sun is finally shining.

Under glorious, sunny skies, the Thompson Falls Invitational track and field meet was held at Previs Field April 16 and area athletes took advantage of the weather by posting good marks and times when finally given the opportunity. Eleven teams, including squads from as far away as Lincoln and including all four from Sanders County, competed for honors.

The host Thompson Falls Blue Hawk boys and Lady Hawks both ran away with the team titles in the annual meet, bringing a twinkle of satisfaction to the eyes of coach Trenna Ferris.

"We were thrilled with the results of the Thompson Falls Invite," she said. "Our athletes really wanted it that day and had the support of their families and the home crowd."

Jody Detlaff, the starting shortstop for the Lady Hawk softball team, showed her track and field chops by winning the high jump (with a State B qualifying effort of 5 feet even), taking second in the discus and third in the shot put.

Maya Stiles cleared 8-6 in the pole vault to win that event and claimed top honors in the 100 meter hurdles, in addition to winning third in the 200 meters.

The 400 and 1600 meter relay teams each took second place in those races.

Noxon's best hurdles racer, Edison VanVleet ran down second place in the 110s and third in the 300s, besides joining Brubaker, Jared Webley and Avery Vogel in winning the 400 meter relay. Webley also placed sixth in the individual running of the 400 meters and ran a leg on Noxon's third place relay in the 1600 meters.

Only one Noxon girl scored in the varsity portion of the Thompson Falls Invite but Delaney Weltz scored in a big way, claiming first place wins in the javelin (106-4), the discus (95-1) and the shot put (33-5).

Freshmen Katelyn Christensen and Jack McAllister did the most scoring for the Hot Springs girls and boys teams. 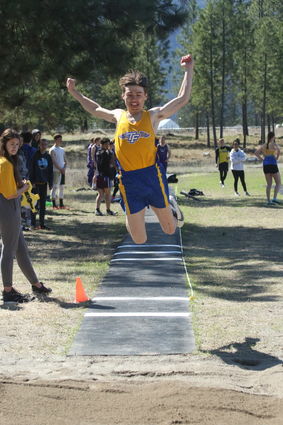 HEADING FOR A SANDY LANDING - Nick Viera of the Blue Hawks long jumps during the Thompson Falls Invitational. Viera was one of many Sanders County athletes who qualified for Top 10 and Top 8 meets earlier this week.

Jack's older sister Elena McAllister won third place in the 300 hurdles and fifth in the 100 hurdles to complete scoring for the Hot Springs girls.

Tyler Carr (third in the 400 meters) and Kyle Lawson (third in the 110 hurdles and sixth in the 300s) completed individual scoring for the Spa City boys. The Heat's 1600 meter relay quartet also placed fourth in that race.

Malachi Paulsen won third in the javelin and Charlie Rehbein fourth in the discus for the Plains Horsemen's only points in the meet.