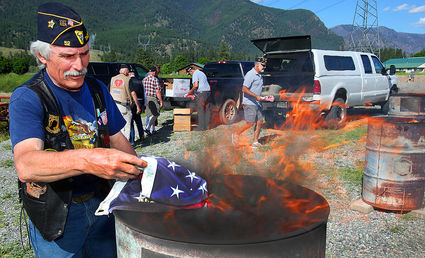 GOODBYE OLD GLORY – American Legion Post 52 member Ron Chisenhall dips an unserviceable American flag into a barrel of fire as a means of retiring the flag at the Clark Fork Valley Elks Lodge 2757 in Thompson Falls. In the back, Marv Tanner gets ready to place a flag in the fire.

The red, white and blue stars and stripes were quickly engulfed in flames to the point it was unrecognizable as the symbol of America. A group of men placed Old Glory in a barrel of fire - not as a demonstration, but out of respect.