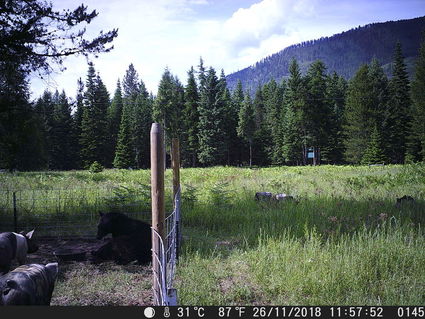 PIGLETS AND POOH - A black bear joined the Nygaard family's 4-H pigs for a snack on Sunday. The bear was caught by neighbor Gary Backus on a game camera.

A Thompson Falls family who live north of town had a unique interaction with a black bear. The Nygaard family had black bears join their 4-H pigs in the livestock pen earlier this week.

The bear was captured on a game camera set up by the Nygaards' neighbor, Gary Backus. The bear was seen eating the pig food in the pen on Sunday. The family called Montana Fish, Wildlife & Parks (FWP) bear management specialist Kim Annis, who installed electric fencing around the livestock pen on Monday. Annis said that bear activity is normal this year, and that people see a little more movement in breeding season, which runs late May through July.

"Conflicts are at a nice, normal level," Annis said. She noted that the first thing FWP does when they get a report of a bear conflict is to work with residents to secure the reason why the bear is there. If the bear refuses to leave the area, FWP will consider other tools, including trapping and relocating. Annis said there are lots of options for people who have bear issues. "The sooner the call the better," she stated. "We like to stop things before they keep going. We don't want people to lose livestock, but we all live in bear country and there are things we can do to prevent these problems."

In the case of the Nygaard bear visitor, Annis said the result was good because the bear was only interested in the feed and not the livestock.