Larsons & Greens, a combined grocery, dry goods and hardware store, burned in February of 1968. It was located on the corner of Main Street and Broad Street. The brick back wall of the building is still standing.

City Building Inspector Gerald Eldridge Monday night was instructed by the town council to deputize a contractor to inspect and determine the strength and safety of the remaining walls of the Larsons and Greens Building.

The action came in connection with a letter from Postmaster N.J. LaFriniere – the second he had written to the council about the walls – which expressed concern for the safety of post office employees and vehicles who daily walk near the burned out structure.

According to provisions of the Montana State Uniform Building Code, which has been adopted as a standard by the council, after an inspection has been made and if the building is declared unsafe, the owners have 90 days to rehabilitate, restructure or demolish it. Failure to do so can result in a maximum penalty of a $300 fine and 90 days in jail.

Council president Forrest Dobson said, "I think we would be neglecting our duty if we don't do something about the situation."

RIVER MAY BE HIDING STOLEN AUTOMOBILE

Sanders County and Thompson Falls law enforcement officers were renewing their efforts Tuesday to solve the mystery of a missing auto that is believed to be lodged at the bottom of the swiftly flowing and deep Clark Fork River below the high bridge.

Undersheriff Jack Wakefield said the sheriff's office received a report a week ago of tracks, which appeared to be left by a motor vehicle beside the north end of the high bridge. The tracks led over the bank and down the steep bank to the water's edge. At the shoreline, officers found two hubcaps and a couple of pieces of chrome.

The evidence all pointed to a vehicle in the river, but at the time the sheriff's office had not received any report of a missing auto or a missing driver.

The water was too deep and too swift to see any vehicle in it. A boat was used to search the shoreline, but because of the swift water could not reach the site. The current was too swift for divers.

Then Thursday, the sheriff's office received a report from Ray Hoff that his 1973 Oldsmobile Toronado was missing. Hoff reported it apparently had been stolen while he was out of town.

The hubcaps and chrome matched the 1973 Toronado. 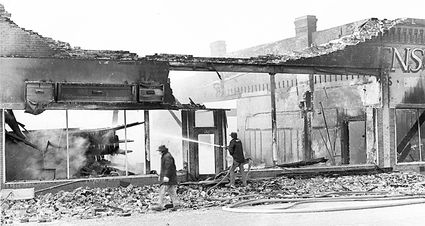 Larsons & Greens, a combined grocery, dry goods and hardware store, burned in February of 1968. It was located on the corner of Main Street and Broad Street. The brick back wall of the building is still standing.

With the flow of the Clark Fork River dropping daily, Town Marshall Harry Petersen said Monday night he planned to dive Tuesday to search for the auto. He said he believed that Monday he could make out the form of the auto in water about 20 feet deep. Petersen said if the auto is located, it will probably be brought to the surface.

THE ORIGIN OF THE NAME, PATRICK'S KNOB

It was named for John W. Patrick, who was the third white man to arrive and settle in the Plains Valley in 1889. He located on the John F. Matthews place adjoining Plains, which he later sold to Neptune Lynch, Sr., for 50 head of hogs. Mr. Patrick ran a ferry boat across the Clark Fork River at Plains to accommodate the pack strings carrying provisions and clothing from Walla Walla to people in Montana. One of the bosses of the pack trains remarked to Mr. Patrick that "Yonder mountain seems to be very high," and his answer was, "Oh, that's only a little knob." The peak has been known since that day as Patrick's Knob.