Over the Hill gang hosts a poker party 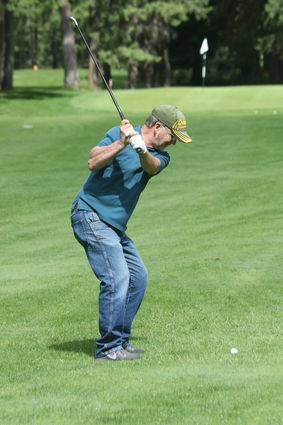 SHOWN PLAYING through on River's Bend's picture-perfect No. 7, Randy Hojem put this shot in the middle of the green in recent Over the Hill golfing action.

Call it a poker party played on the fairways and greens, and only very rarely from the bunkers and trees.

The Over the Hill gang decided to play a friendly game of golf poker to usher in the week Monday morning at sunny River's Bend.

Using their scorecards instead of playing cards, players would then put together their scores from each hole to arrive at their hand to be played.

Bernhardt and Beaty both knocked down chip-in shots on No. 10 and Deck got one down on No. 16.

Weather permitting and bodies willing, the Over the Hill players will again gather at the Bend for another round of fun in the sun next Monday morning.