BIG SPLASH – Plains Piranha Hallie Corbin gives her all for the butterfly stroke during the 200-meter individual medley where she had to also do the freestyle, back and breaststroke at the Columbia Falls Swim Meet.

Nearly a dozen boys and girls from Plains traveled to Columbia Falls to compete in the annual swim meet last weekend and seven qualified in the meet's final championship round Sunday.

"They're getting better with their strokes and that helps them with their times and they're gliding through the water faster," said Shayna Swanson, the team's coach this year. Swanson also coaches the Polson Lake Monsters.

Two hundred and fifty-three kids from around Montana took part in the meet, which lasted more than seven hours on Saturday and five hours Sunday. There were 14 teams at the meet, including nine members of the Plains Piranhas. The Harlem Swim Team had only one competitor at the meet. The biggest was the Columbia Falls Swim Team with 65 competitors and it took first place overall with 916.5 points. The Columbia Falls boys finished at the top with 379 points and their girls took first with 537.5 points. Second place overall went to the Bitterroot team, which fetched 811 points, followed by Big Sandy with 596 points.

With the Plains pool closed for repairs, the Piranhas are utilizing the indoor Polson pool twice a week to train. Quinn's Hot Springs Resort is giving the team free access to its pool twice a week. Kirk Frye, a former Plains coach, is helping.

Seventeen-year-old Cree Lulack, the oldest team member with 11 years under her belt, took third in the 50-meter butterfly with a time of 39.73 seconds. Lulack also nabbed fifth in the 50-meter freestyle at 34.95. Lulack comes up for air only twice during the 50 meter freestyle races, once up and once down. "I figured the less I breathed the faster I'd go," said Lulack, who's in her final year of competitive swimming. She finished sixth in the 100-meter freestyle at 1:18.66, dropping nearly three minutes off her Saturday time.

Her brother Pepper Lulack, competing in the 11-12-year-olds, placed fourth in the 50-meter backstroke at 59.20 and seventh in the 50-meter freestyle at 45.99, dropping just over a minute from his preliminary race. 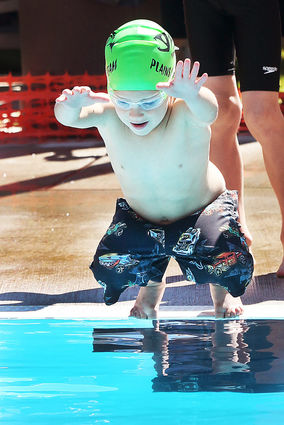 Eight-year-old Emme Tingley finished in ninth place in the 50-meter backstroke at 33.22. Tingley's brother, Sam, and sister, Reagan, also competed, but did not place in the top 12 slots Saturday. The former Plains family are the only Missoula residents on the team. Sam, 5, is the youngest member, joining only a month ago. In his first competition at Hamilton he was disqualified in both races, but at Columbia Falls he finished both the 25-meter freestyle and the 25-meter backstroke without a problem. Reagan, 10, did the 50-meter backstroke, freestyle and breaststroke events.

The Piranhas will compete next at Conrad this weekend.