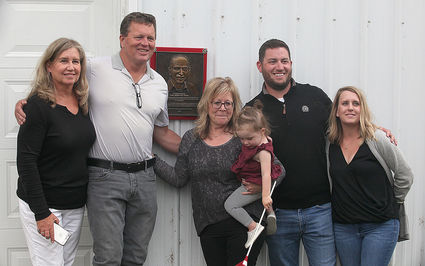 IN HONOR – The family of Clyde Terrell pose for their photograph at his plaque at the Agriculture Building at Sanders County Fairgrounds. From left are daughter-in-law Mary Terrell, son Greg Terrell, daughter Kim Burgess, great-granddaughter Dempsey Burgess, grandson Dusty Burgess and his wife Tricia Burgess.

A longstanding member of Paradise was honored last Wednesday as a tribute to his selfless devotion to the community by dedicating the Agriculture Building at the Sanders County Fairgrounds to the late Clyde Terrell.

Nearly 40 people showed up for the Plains Lions Club dedication, which included...