A decade of blues 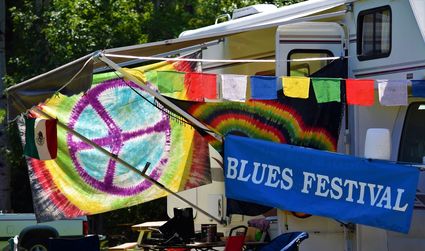 The festival kicked off on Friday and closed on Sunday featuring many of the best in the land of blues music. Opening was Robin Barrett featuring Tiphony Dames, Coyote Kings special guest Diego Romero and Crocs with special guest Richard Sabo. Randy McAllister, noted as one of the most versatile of all blue artists, finished off the opening night of blues bliss.

According to fest coordinator Lorne Riddle, Friday night was "the biggest turn out ever." He was not exact on how many people were in attendance. "So many people are in the woods, but we were pushing 1,000."

First to grace the stage on Saturday was Warhall followed by Franco Palleta and the Stingers, Stacy Jones Band, Step Brothers, Amanda Fish and Jimmy D. Lane. To keep the night alive, the "All-Star, After-Hours Blues Jam" kept the stage alive into the late hours, giving life to every possible minute. 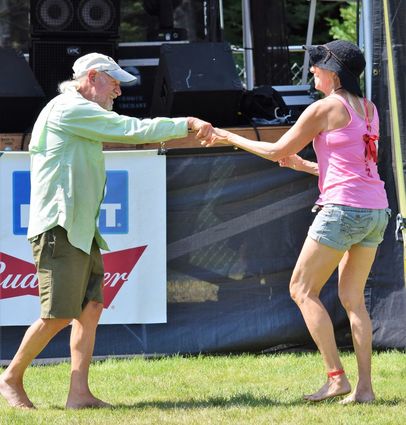 "I'M A FEELIN' GOOD" – Tony and Jill Barone (above) shake a leg to Bryan Warhall's sounds at the Big Sky Blues Festival in Noxon. The Barones are "roamers" and live "south of heaven" as they call home Coeur d'Alene and Hope, Idaho, and "everything in between." Tie-Dyed was the theme at the festival celebrating all walks of life. Like most music festivals, there was a feeling of commonality as music brought everyone together.

Not too early to rise Sunday morning, the festival kicked-off for one last day at noon when Kevin Van Dort took center stage and Mark DuFresne wrapped up the fest as the last single performer. After that, collectively, the "Big Sky, Big Jam" took over and sealed the closure of 2019's Big Sky Blues Festival. Prior to Van Dort's soulful performance, Charles Mack provided bass guitar instruction for the youth lesson of the day.

Festival board member Brenda Owens recently gifted the Noxon School's music program with bongos and $450 from prior years' ticket sales. "Every time someone buys a ticket to Big Sky Blues, a portion is donated to local schools to foster the love of the blues to students," the board stated.

Vendors were available to provide beverages, food, crafts and event memorabilia. Riddle believes there were a few more vendors this year than in previous years. Those who travelled from longer distances, or locals who didn't want to miss out on a single beat, took advantage of camping accommodations at the park.

Kayaking and taking a quick dip in the Clark Fork while listening to the sultry resonance of Big Sky Blues was a definite highlight during the over 90-degrees, three-day event.