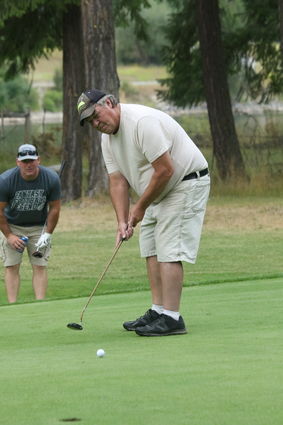 With Project Ascent the main beneficiary of this year's event, the 11th Annual Avista Charity Scramble was played in near-perfect weather at River's Bend Saturday.

The tournament featured 13 men's teams and five women's teams of four this time around River's Bend. A total of 72 golfers played in this year's Avista tourney

On the men's side, the fearsome foursome team of Dylan Beckman, Mike Bates, Brett Damaskos and Brandon Damaskos put the hurt on the Bend with an out-of-sight round of 56.

With the women, the self-styled "Squad," the only quartet to wear matching team shirts, comprised of Ledger editor Annie Wooden, Doree Thilmony, Katrina Nygaard and Sarah Fairbank played some serious golf, carding a combined 71 to hold off the other teams. 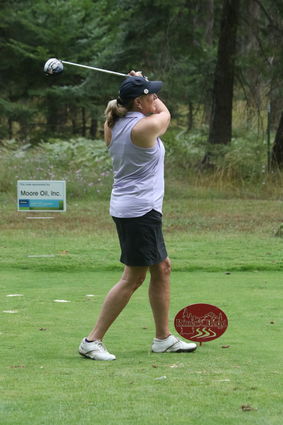 EYE ON THE BALL - Barb Petteys follows through on her swing after hitting a tee shot on No.5.