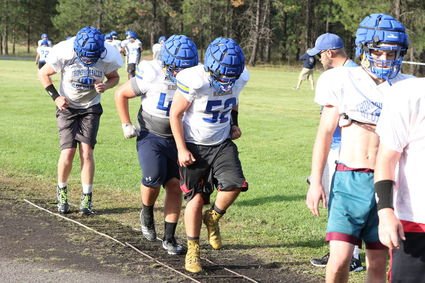 HERE'S THE DRILL! Several members of the Thompson Falls football team watch their feet as they do a drill at Previs Field recently. Coach Jared Koskela and his Hawks will play the school's first 8-Man game in decades versus Choteau in Philipsburg Saturday.

It's seasons greetings as the fall high school sports seasons begin this week across Montana.

These are greetings not for the seasons that come with Christmas every year, but for the fall sports seasons that also appear annually, only around Sept. 1 rather than during the holidays.

But it is like the holidays for high school sports fans who have now gone months waiting, without any official games, matches or meets to watch.

In the annual early Christmas present to all prep sports fans in Montana, Labor Day weekend marks the beginning of the high school football, volleyball and cross country seasons.

The athletic merriment will begin Friday as the Hot Springs Savage Heat hosts the Harlowtown Engineers and Plains Horsemen visit the Charlo Vikings for the first local football games of the season.

Also on Friday, the Thompson Falls Lady Hawks will play the first day of the two-day Choteau Invitational on the Hi-Line to open the volleyball season.

The only cross country team in the county, the Thompson Falls Hawks and Lady Hawks will run in the Deer Lodge Invitational for the first time Friday. Coach Sarah Naegeli has run her team in a small race near the Sanders County Fairgrounds in the past, but elected to get into a bigger meet to open the season this year.

The Deer Lodge Invite was originally scheduled for Saturday but moved to Friday by race officials.

The only drawback to Naegeli's plan will be the fact that her top runner, junior Josey Neesvig, who earned All-Western B honors and narrowly missed All-State B recognition last fall, will be back in Plains showing animals in the fair. The Deer Lodge race will be run at the Grant Kohrs Ranch National Historic Site.

"It's too bad Josey won't be running but we are really looking forward to seeing the Kohrs ranch," Naegeli said, "and learning a little more about our Montana history. In addition to getting a good race to start the season."

Saturday will also mark the Thompson Falls Blue Hawks' first game as an 8-Man football entity since what is believed to be the mid 1950's, when coach Jared Koskela and crew travel to Philipsburg to take on Choteau, another team that has just moved down to the 8-Man ranks.

Also on Saturday, coach Sandra Kazmierczak and her Lady Hawks will play the second day of the Choteau tourney, while other Sanders County net squads Plains and Noxon are set to play in the Mission Invitational.

The county's other volleyball team, the Hot Springs Savage Heat will not open season play until Tuesday when they host Charlo.