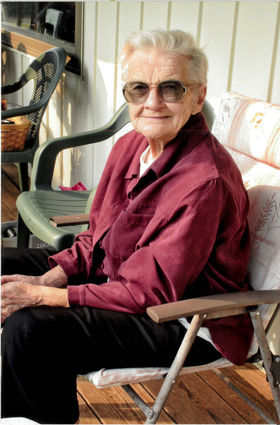 Mary Ann Thompson passed away August 30, 2019, in Plains, Montana, at the age of 92. She was born April 22, 1927, in a two-room house in Jump River, Wisconsin, to John and Lillian Latz. She lived through the Great Depression, World War II and raising 11 children, 8 boys and 3 girls. After graduating high school, she attended Wisconsin State University in Eau Claire, Wisconsin, and became a teacher.

Her first teaching job was in Westland School in Taylor County, Wisconsin. While there she met Richard W. Thompson and they were married on December 23, 1946. Mary Ann was a devoted wife and mother, and a very hard worker. Raising 11 children on a farm in Wisconsin, she taught them how to work without complaining or finding fault with others. She was always busy baking bread (eight or more loaves per week), raising a large garden, canning and cooking, cleaning and caring for her children and husband. She also helped buck bales, milk cows and whatever else was needed.

Her family always came first, and she was always kind to everyone she met. All her children feel very blessed to have had her for their mother, and she will be deeply missed. Her children will all remember eating fresh, warm bread right out of the oven, and the great home cooked meals she always made for them. She would always tell her children "If you don't have anything good to say, don't say anything at all," and "Things could always be worse." Also, she would tell the boys "If you're going to fight, go do it outside."

In 1971, Richard and Mary Ann moved to Montana with six children still living at home. They lived in the Noxon, Heron and Trout Creek area for several years, and eventually ended up living in Hot Springs, Montana. Mary Ann's last few years were spent living in Plains, Montana.