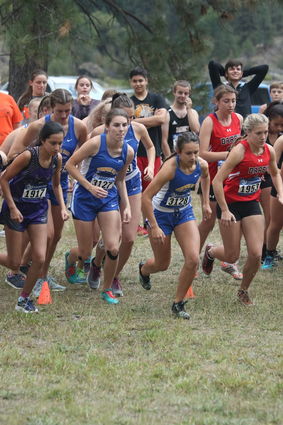 STARTING OUT STRONG - Identifiable Lady Hawks at the start of the Thompson Falls Invitational last month include from left, Megan Baxter, Sierra Hanks, Ellie Baxter (behind Hanks) and Josey Neesvig. Hannah Corl, Reagan Hanks, Shaylynda Walker, Amy Risser and Roni Hanks were behind the Lady Hawks who could be identified in this picture. The Thompson Falls cross counrty team will compete in the Ronan/Polson Invitational Saturday.

The cross country season is all downhill from here.

Okay, maybe not all downhill, every course has an equal amount of up and down travel, but the season is now a little more than half over and heading to its inevitable conclusion at the All-Class State meet in Great Falls Oct. 26.

Coach Sarah Naegeli and her Blue Hawk harriers tripped the light fantastic by running in the prestigious Mountain West Invitational Saturday, quite possibly the biggest cross country meet of any season in Montana.

The Mountain West is always held at the University of Montana Golf Course, right at the mouth of Hellgate Canyon, where bad winds can develop given the right atmospheric conditions. Last week's cold front produced just those type of winds Saturday.

"How windy was it?" Naegeli rhetorically asked. "The boys varsity runners didn't hear the call to start, and thought the gun going off was a five minute warning, leaving about one-third to one-half of the runners at the starting line were looking around to see if it was actually the start."

Naegeli said the girls varsity race "wasn't much better, but at least they knew to keep a close eye on the starters even if they couldn't hear anything."

In spite of the winter-like, howling Hellgate winds, Naegeli said her Hawk harriers still enjoyed a fine day, in one of the biggest races many of them will ever run in.

"Mountain West is a nerve-wracking race with the large number of runners, variety of different sized and out-of-state schools," she offered. "Our veteran runners are used to this type of competition , but it's a new experience to many of our runners."

Naegeli said that several of her runners marked great times in spite of the whistling winds and the elevated competition.

"A huge shout out to Reagan Hanks, who had a lifetime best in the cold and wind," she said. "Ellie (Baxter) has been consistently been dropping her times the last three races and is more determined each time she competes. And Hannah (Corl) also had another PR."

Naegeli said several Hawks were entered in the varsity competition and "were in the thick of those races. Josey (Neesvig) and Justin (Morgan) continue to test different racing tactics, and work on their focus and drive. 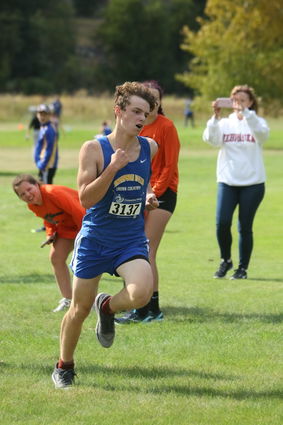 "Ellie had a PR and Megan Baxter's third mile was quite strong," she added. "Jack (Green) did well stepping into varsity in such a huge race, and I look forward to his contributions. We learned quite a bit about strategy, starting and pacing, which will all be helpful in the upcoming meets."

In the Mountain West junior high races, Hattie Neesvig and Cael Thilmony led the way for the younger Hawk harriers.

"Hattie finished 18th, which was amazing considering she'd been sick and on cough syrup all Thursday night and Friday," Naegeli said. "That just shows what a tough competitor she is. Cael continued his great season, consistently showing huge improvements over last year. Nathan (Cottingham) and Faith (Palmer) have both stepped in as solid competitors this season."

The Hawks will run in the Ronan/Polson Invitational Saturday.