Horsemen are ready for Hawks 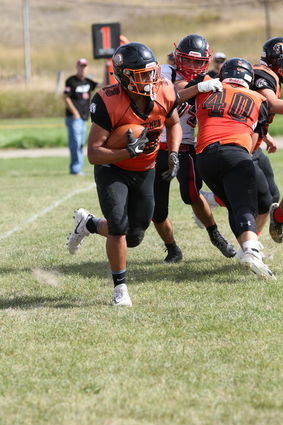 PACKING THE PIGSKIN against Darby several weeks ago, the Horsemen's Esvin Reyes gets good blocking from teammate Tucker Foster on a running play. Horsemen host Thompson Falls in a conference game Friday.

The Horsemen's coach wonders if he has the horses to match those that Thompson Falls has.

Facing off on the gridiron for the first time in many seasons, the Horsemen, 2-2 in Western 8-Man conference play and overall, will entertain their Sanders County neighbors from the west for a friendly game of smash-mouth football, with kickoff set for 7 p.m. The Hawks will enter the fray with a 3-1 mark in league action and 4-1 overall.

"Thompson Falls has a lot of horses besides having some good numbers and depth," Fultz said. "But what really impressed me was their line play, they are a good blocking team. They have good skill players but the O-line is what really makes them go."

With only four regular season games remaining, the Horsemen cannot afford another league loss if they hope to make the 6-Man State playoffs. A 41-26 loss in Plains to Darby several weeks ago still sticks in Fultz's mind.

"We felt like that was a game we could have won, and our season would be looking a little different right now if we had," he said. "It could come back to haunt us. As it is, we will probably have to defeat both Thompson Falls and Clark Fork if we hope to make the playoffs."

Clark Fork leads the Western 6-Man conference with a 4-0 league record, Mission is second at 4-1 and the Hawks third at 3-1. Darby and Plains are currently tied for sixth at 2-2 but the Tigers own the tiebreaker with the Horsemen due to their road win in Plains.

Although defeating both the Hawks and the Mountain Cats in the next three weeks may seem like a daunting task, Friday's game in Plains is the Black and Blue game, and emotions are likely to run on high for both teams in a rivalry game such as this.

"We will be ready to play Friday night," Fultz promised. "We look forward to a good game."