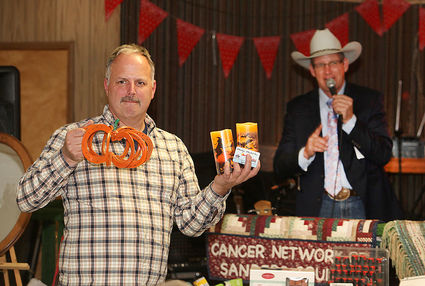 DRIVING UP THE PRICE – Steve Seilhymer shows a horseshoe pumpkin made by Jerry Kohm and scented candles that were part of a Halloween basket donated by the Wachob family of Plains while auctioneer Kevin Hill drives up the bidding. It was part of the Cancer Network of Sanders County Fall Extravaganza fundraiser at the VFW Hall last Thursday.

The Cancer Network of Sanders County (CNSC) will now be able to help more than a dozen cancer victims, thanks to the raising of $12,288 at the annual Fall Extravaganza fundraiser at the VFW Hall last Thursday evening.

"It was a successful night," said Sherry McCartney, the nonprofit organization's secretary and treasurer. McCartney said the group raised just over $6,500 in the silent and live auctions, which featured more than 50 items, including gift certificates, college football and basketball tickets, beer, coffee, tools, artwork, furniture and a free airplane ride by Plains resident Randy Garrison.

About 60 people showed up for the event, which lasted almost three hours and included a $25 dinner, provided by Tim and Carol Brooker of Plains, and featuring auctioneer Kevin Hill, who volunteered his auctioneer skills. CNSC was established in 2001 to monetarily help cancer victims in Sanders County. At first, the organization was able to give a gift of only $50, a one time payment, said Kathy Miller, a CNSC past president. She said that recipients could use the money for whatever they choose. This year, it has provided $900 gifts to people and since its inception has provided $647,000 to Sanders County residents.

"This is one of the poorest counties in the state, yet the people here have opened their hearts and given us donations that we can give to cancer patients," said John Clark, CNSC president for the last two years.

Plains resident Joyce Dougan, a CNSC member, donated two handcrafted shawls. Laura Dressel of Thompson Falls donated several items, including the largest piece, a 4-foot by 6-foot custom made potting bench and an antique valet chair that went for $300. She also baked three cakes that fetched $100 apiece. A Butcher's Nook donated cherry pie also went for $100, but it was a Dog Hill Bistro chocolate cheesecake that fetched the top dessert price at $130.

A Cabela's Catch All Fun Pack, which contained stuffed animals and a gift card of an amount only the donor knew and bidders found out only after it was purchased for $300, the same value of the card.

Jerry Kohm of Plains donated four pieces of his horseshoe art, a hobby of his for the last five years. He said it took him an average of 1.5 hours to make each of the items: a pumpkin, horseshoe crab, a cat and a frog.

The event also had a 50/50 drawing that reached $716. McCartney won the drawing and donated it back to CNSC, as did Joel Collett when he won the $105 in the Heads or Tails game.

All of the items donated were from individuals and businesses from Plains, Hot Springs, Thompson Falls and Trout Creek, according to Miller. McCartney said that businesses in the county donated thousands of dollars to help put on the event. "We appreciate the generosity of Sanders County," said Miller, who's been with CNSC since the start. "Given the fact that our attendance was down, we did pretty good."

The next event for CNSC is the annual lantern launch at the Sanders County Fairgrounds, scheduled for Saturday, Nov. 30.