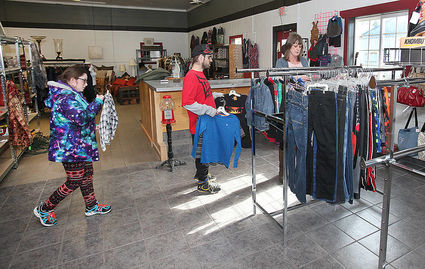 The Little Bitterroot Services is expanding its services to the community by opening a new store in Plains. The organization purchased the former Stageline Pizza and attached gym owned by Jim and Lin Foster in June and hopes to have their new gym and thrift store open within the next month, said Shannon Benson, the executive director.

"We're looking forward to having the new store. It's good for the community and for our clients," said Benson. Little Bitterroot Services, Inc. is a nonprofit organization that specifically provides services, such as employment and housing, for people with disabilities. "It really makes them feel like they're a part of the community and accepted by the community," said Benson, who's been with the organization for 23 years and in charge for the last seven. With their stores in Plains and Thompson Falls, it also provides the community more buying options and is a source of competitive employment.

The organization purchased the former pizza building because the Little Bitterroot Thrift Store on Lynch Street was getting too stuffed with merchandise. Benson said the new site is some 2,000 square feet, about the same size as the old site, but is more open. She said the new site will have a wide variety of their higher end merchandise, but the old store will still have merchandise and it will continue to be the drop off point for donations.

Little Bitterroot Services was established in 1974 and now has 33 clients ranging from ages 20-71 and has around 60 staff members for the organization's housing units, thrift stores in Plains and Thompson Falls, and the Corner Grocery Store in Plains.

"We're running out of room so we're expanding," said Amy Ross, the retail store manager who's been with Little Bitterroot Services for 22 years. Over the last three months, they have been cleaning and repainting the new store and gymnasium. Ross said they hope to open the store on Nov. 1, though they haven't come up with a name for the new facility yet. All of the store items, from jewelry to furniture, is donated by community members. Benson said the store wouldn't be a success without the generosity of people in the community. She also said that with the new store, they likely would be hiring additional staff members. Benson said pay starts at $11.75 an hour.

The staff had a contest for naming the new gym, which ended up as "Slim Gym," a name given by George Burrell, who won a Harbor Freight gift certificate. The staff revamped the entire gym and spent $15,000 for new equipment, including new treadmills and Peloton stationary bikes, which connects to the Internet to pull up a personal trainer, said Benson. In addition, they bought an electronic "Mirror," a piece of high-tech workout equipment at a cost of $1,400. Benson said the Mirror is also an Internet interactive workout system that has yoga, Pilates, kickboxing, stretching, cardio exercises, and other exercise programs.

The gym has a new large TV, a sound system and Wi-Fi. It has eight cardiac machines, four weightlifting machines, along with kettle bells and dumbbells and will be opening this week. Ross said the gym will be open 24 hours a day, seven days a week. Members will use a key card for entry. Cost to join will be $35 a month, $60 for couples, $175 for six months or $350 a year.

Benson and Ross said they're excited with their new facilities. Benson jokingly said she wants to hold their staff meetings in the gym. The gym won't have a full time staff member, but the store will likely have a combination of staff members and clients there during open business hours, which will be 10 a.m. to 6 p.m. Monday through Saturday. Ross said their clients are hard workers and take pride in their work. "We couldn't do this without them," said Ross.