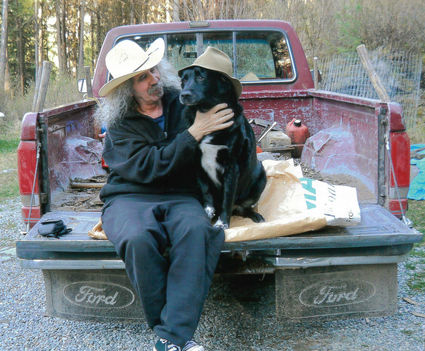 MICHAEL GROSS and his lab, Oscar

Michael George Gross, 67, of Thompson Falls passed away on October 2, 2019 at the Montana State Hospital in Warm Springs. As he liked to say, he was dancing as fast as he could in his longtime struggle with dementia with Lewy bodies.

Michael was born on September 29, 1952, in St. Paul, Minnesota, the sixth child of George and Lola Gross. Although he loved growing up in the outdoors and amongst the city lights of Minnesota, Michael had enough of the winters and eventually found his home of more than 45 years in the Lower Clark Fork Valley. He met Christine Gausnell pulling chain at the sawmill in 1975, and they married in 1982 to start a family on the land where Chris still calls home.

He wore many hats during his years as a working man, from building Target stores in the Midwest and working as a roughneck in the Wyoming oilfields, to hooking logs for Varco Logging out of Superior and scaling timber in Southeast Alaska in between family adventures on the open ocean and in our national forests.

Michael was an earnest person who lived a simple life of integrity and true grit. He was a good-hearted friend, doing everything he could for loved ones. And whether you liked it or not, you always knew where he was coming from.

He was well-read, told great stories, listened to various music genres (at all volumes), loved being in the mountains and always had his black lab Oscar beside him. He was a proud father and grandfather to boot.

Michael is survived by his two sisters, four brothers and many nieces and nephews; his daughter Kellyn Gross, son Lenn Gross and their significant others; and three grandchildren.

A celebration of life will be held at their cabin at the end of Wapiti Point Drive Saturday, October 12, at 2 p.m. This is an outside potluck event with campfires, tall tales and good tunes. Please bring your own chair.