NorthWestern meets with community members after recent draw down tests 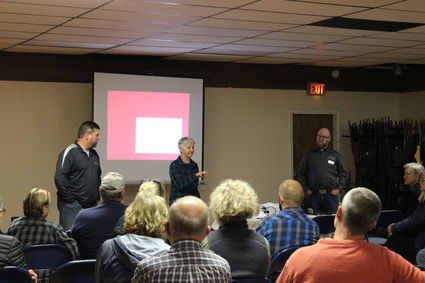 WATER DISCUSSION - NorthWestern Energy representatives met with community members regarding the recent 4-foot draw down of the Clark Fork River.

Residents, including many who live along the Clark Fork River in Thompson Falls, joined NorthWestern Energy last week in a discussion of river levels.

As part of the process to renew the Thompson Falls dam's Federal Energy Regulatory Commission (FERC) license, tests were conducted earlier this month to see the effects of raising and lowering the water level. NorthWestern Energy dropped the water level four feet on Thursday, Oct. 10. While it is well within Northwestern Energy's licensing permit to change the water levels on the reservoir when deemed necessary, many residents were angered when they walked outside to find the river levels so low, that their dock was sitting in the sand.

The intent for last Tuesday's meeting at the Thompson Falls Community Center was to not only discuss people's frustrations on the river's draw down, but to explain the general premise and approach as to why these operational tests were conducted by NorthWestern Energy.

Many of the questions from residents were met with imprecise answers. Much of the frustration of the public centered on why no one was given any kind of notice of the draw down. There were also many questions concerning damages that would be done to boats and docks when left to sit out of the water, as well as concerns with housing equity should the excessive fluctuations on the reservoir continue. Mary Gail Sullivan, Director of Environmental and Lands for NorthWestern, wanted to reiterate to the community, that while 2025 is in the distant future, they are here now to take in the grievances and concerns of the residents. "Thompson Falls has been a tremendous host throughout this project, and we want to be good neighbors," stated Sullivan.

FERC is an independent regulatory agency whose members are appointed by the president and confirmed by the Senate. FERC's authority was granted by Congress under the Federal Power Act, the Natural Gas Act, and the Interstate Commerce Act to regulate the interstate transmission of electricity, natural gas, and oil. Part of this authority includes reviewing proposals for licensing of non-federal hydropower dams. FERC's mission, according to its website (ferc.gov) is, "comprised of providing economically efficient, safe, reliable, and secure energy for consumers." Among the many responsibilities of FERC, overseeing environmental matters related to the hydroelectricity projects holds high regards for NorthWestern Energy. A pamphlet distributed at the meeting detailed that Because of the significant ecological progress that has been implemented, they are able to contribute to the environmental quality for the fish and wildlife habitats. This led to the addition of an upstream fish passage ladder, with the purpose of restoring a more environmental congruence for the fish of the Clark Fork River. Another component of the fish ladder is to oversee and concentrate on the depleting number of bull trout; which is a threatened species listed under the Endangered Species Act. In 2019, more than 1,900 fish have been counted, including one bull trout and one walleye.

The FERC licensing for the Thompson Falls Hydroelectric Project is set to expire December 31, 2025. Sited within the license agreement, NorthWestern is required to file a Notice of Intent and a Pre-Application Document 5-5.5 years before the expiration of the current license. A long-term license requires long-term development, which means the data collections done in this area right now are right on schedule with the re-licensing requirements. To help further this process, NorthWestern prepared what is called a Baseline Environmental Document (BED). The BED states the objective is to submit data that will, "describe existing and relevant information about the Project, including its hydro facilities and operation, area water quantity and quality, fisheries, wildlife, vegetative, aesthetic, socioeconomic, cultural, and public recreation resources." Under FERC's Integrated Licensing Process, NorthWestern is also required "to conduct a formal pre-filing process to describe the project, consult with interested stakeholders, identify resource issues related to continued project operation and gather additional information (studies) as necessary to develop mitigation and enhancement measures for a new license term."

Unfortunately, all the data from the testing that was collected from the Oct. 10 draw down, was not ready to be shared with the public on Tuesday night's meeting. According to the NorthWestern representatives at the meeting, that data won't be ready until sometime next year. Andy Welch, Manager of Hydro License Compliance for NorthWestern Energy, along with his team and consultants, wanted to relay what they were seeing in response to these types of operations.

"We haven't done this rapid of a four-foot draw down in the past, so this was a large opportunity for us to look at all the type of resources we have out on the river relative to land ownership, shoreline issues and to fisheries," Welch said. "Last week was when we did the testing, and we finished up on Thursday, so we don't have a lot of this compiled and evaluated yet."

Welch listed the positive and negative impacts this type of draw down (during and after) could have on the reservoir and the river resources. He stated, "relative to operations, you can have a positive impact on aquatic invasive species management. You could also have negative impacts to shorelines, to fish, and all those sorts of things. So those were the types pieces that were a part of our goal when evaluating those types of tests." Welch listed many of the resources that were looked at, beginning with shoreline erosion, bank stability, bank erosion and bank failure. Potential effects to infrastructure around the reservoir also were reviewed; whether that's the infrastructure of private homes, docks or boat launches. They also looked at everything related to the fisheries. Fish, Wildlife and Parks (FWP) observed the impact to the aquatic life. They wanted to make note of when the fish ladder can and can't be used and whether or not they were seeing fish stranded in the reservoir at certain elevations. FWP took note of the migration corridors to Thompson River and the Cherry Creek access where the fish may be moving; they needed to know if the fish have restricted movement during these operations. Recreational use was also looked at, and what type of impact people have while recreating on the river. Access to boat launches, smells and scenery were all taken into account. Regarding public safety, NorthWestern looked for any exposed hazards that would cause problems for boaters, along with any extreme fluctuation rates that may cause safety incidents while recreating on the river.

Residents with comments or questions can contact Mary Gail Sullivan, NorthWestern Energy Director of Environmental and Lands, at (406) 497-3382 or [email protected]