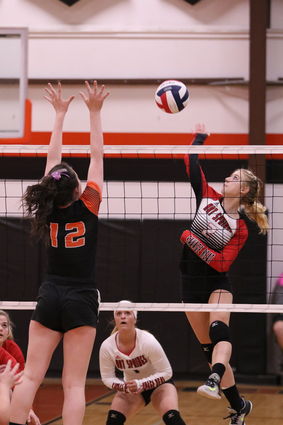 PLAINS – Talk about getting into the swing of things.

Coach Alisha Pablo and her blooming Savage Heat complete regular season play this week, visiting Clark Fork for a match in Superior Tuesday (results were not available) and hosting Victor for their senior night finale in the Spa City Saturday.

The Heat appear to have gotten their game together at just the right time as the District 14C tournament will be played in Noxon Nov. 1-2.

The road win over Plains was one of the Savage Heat's finest performances yet, a statement win of sorts for the Hot Springs girls.

"We really needed a match like we played in Plains," Pablo said. "They are a great team and we like the competitive games we get with them."

The win in Plains turned out to be an important one. "We needed that match to get into second place," Pablo said, "and that will be important in the district tournament."

Please see Trotter story for Plains statistics from the match.

In St. Regis, the Heat limited the homestanding Tigers to less than a set's worth of points (24) all night in marching to the easy three-set win.