CFVH residents get in the holiday spirit 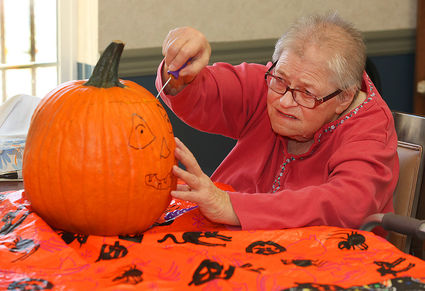 HALLOWEEN TRADITION – Sharon Wilson of the Clark Fork Valley Hospital Long Term Care makes a cut around the top of her jack-o'-lantern.

They might not be as nimble with the carving knives, but that didn't stop a group of seniors from making jack-o'-lanterns at the Clark Fork Valley Hospital Long Term Care Tuesday morning.

Six nursing home residents from 76-year-old Sharon Wilson to 92-year-old Laurayne "Toddy" Silverthorn showed their pumpkin carving skills and artistic talents during a pumpkin carving session to decorate the facility for Halloween. Some went with the traditional jack-o'-lantern look, while others made their own style, including Joan Drastz, 82, who drew a bat on her pumpkin. Those who had trouble wielding the carving tool got help from activities directors Del Smith and Lorraine Miniati.

The jack-o'-lantern designers also included Virginia Brown, Rose Neumeyer, and Eldon Johnson. Johnson, 89, went with small round eyes and a roundish mouth with no teeth. Wilson and Silverthorn decorated both sides of their pumpkins.

"It takes them back to their childhood and it's fun for them," said Smith, who added that it's good for them to do an activity with their hands. However, Smith might have had more fun than the residents. "I think it brings out the kid in him," said Miniati. "I broke off one of his teeth, so it looks like he's got a cavity," said Smith, who has been holding a pumpkin carving event at the nursing home for the last five years. 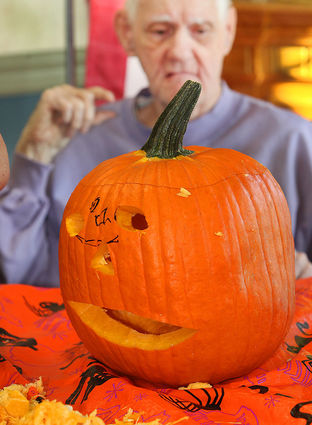 The residents spent just about an hour on their pumpkins, which will be displayed inside the nursing home with battery operated lights inside until Halloween, when they will be placed at the entrance of the nursing home for trick or treat visitors. The long term care facility residents will give out candy 4:30-6:30 p.m. on Halloween. Smith said the majority of the candy was donated.

On Tuesday, the pumpkin carvers first drew their designs on their pumpkin, then scrapped all the inside material out. They separated the seeds, which will be seasoned and baked by the hospital kitchen staff for the nursing home residents.

"Our family used to carve pumpkins and then we'd make pumpkin pies. It was a lot of work, but it was fun," said Wilson, who also made a dozen felt jack-o'-lanterns and trick or treat Teddy bears for the kids. Wilson plans to dress up in a witch's hat and mask for Halloween. She said Johnson calls her the wicked witch of the north. Wilson said she and her daughter in Hot Springs used to make jack-o'-lanterns every Halloween.