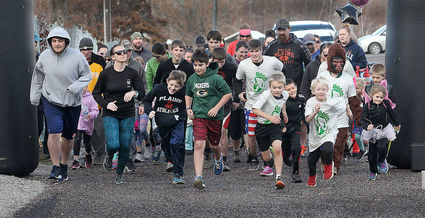 OFF THEY GO – Kids burst off the starting line for Sage's Sasquatch Shuffle 5K at Sanders County Fairgrounds. More than 50 people signed up for the race, which was part of a fundraiser to help the Doble family with medical expenses after Sage Doble was accidentally shot. The 10-year-old Sage is on the right wearing a sasquatch outfit.

There was a Sasquatch sighting Sunday afternoon running along River Road East and it was following a group of runners. Oddly, they were running to help Sasquatch - 10-year-old Sage Doble - who was injured in a hunting accident and dressed in a Sasquatch outfit.