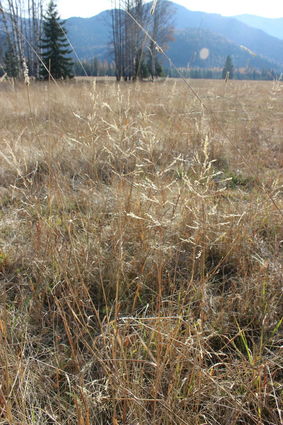 Ventenata can invade rangeland, pastures, winter grain and hay fields. Ventenata infestation has been confirmed in 19 counties in Montana.

A noxious grass has taken the lead in threatening the destruction of Montana's agriculture. Ventenata (Ventenata dubia) is an aggressive, self-pollinating, annual winter grass; whose growth and sustainability overpowers not only the native vegetation, but other invasive weeds as well. Also known as wiregrass or North African grass, this weed is non-native to Montana, but has the ability to deteriorate the surrounding rangelands, pastures, and wildlands. On Thursday, about 15 ranchers and landowners joined the MSU County Extension and Sanders County Weed District for an educational field day to learn, identify, manage, and control ventenata.

In 2018, an estimated 55,000 acres in the state was taken over by ventenata, and its presence has been confirmed in 19 of Montana's counties, according to Juli Thurston with Sanders County MSU Extension, who led the field day on Jim Elliott's property near Trout Creek. In June 2019, The Montana Department of Agriculture added ventenata to the noxious weed list. It has been listed as Priority 2A, which means this weed is common in isolated areas in the state and requires eradication or containment where less abundant. Management can be prioritized by the local weed districts. Both Sanders and Gallatin counties have declared this grass as a county listed noxious weed.

"Ventenata is increasing at a faster rate than any invasive plant I have seen in Montana in the last 20 years," Jane Mangold, Extension Specialist and Associate Professor at Montana State University, said in a press release.

While there can be several reasons behind the accelerated advancement of ventenata, many appear to believe that the dispersal of this weed has been due to its ability to cling to clothes, livestock and wildlife. Ventenata reproduces by seed, and each plant can produce up to 35 seeds. These seeds, which can be easily carried in the wind, have been known to spread through roadways and forage. A study done by MSU Extension has shown that contaminated seeds from Washington and Idaho are suspected as a source for the infestation in Montana.

Although more studies need to be done in Montana on the economic impacts ventenata has created; the infestation has predominately caused problems in managed perennial hay and grass crops. Within three years, a substantial infestation can cause reductions of 50% or more in forage yield and crop quality, according to MSU. The high levels of silica detected in this weed, prevent it from being a suitable grass for wildlife and grazing animals. Ventenata's rapid growth severely impacts the biodiversity of Montana's rangelands and pastures. Without proper grazing systems in place, this noxious weed will take over, hindering the growth of the native plant community.

Ventenata can be tricky to spot and hard to identify, especially at the seedling stage. Additionally, the weed likes to grow among patches of cheatgrass – to which it looks similar – making it even harder to detect. Ventenata mostly germinates in the fall, it customarily grows six to 18 inches tall, and its color is described as tawny to light yellow. Characteristics to look for include reddish-black nodes, leaves that are narrow and folded lengthwise, and seeds that have bent and twisted awns that look similar to wild oats.

Elliott said that once a landowner sprays for ventenata, the land can't be used for anything for the following three years. That includes planting or grazing.

Early detection is vital to limiting ventenata invasions, which was one of the key reasons for the field day.

"People don't really recognize it, which is the reason for today's meeting. The discussion has finally started, and we want landowners to begin to be able to identify it, because it spreads so fast and it is so devastating to the ranchlands and farmlands," Thurston said Thursday, adding that MSU Extension has found that "mowing has limited success for small infestations as the wiry grass and bent-nature of the awns are difficult to cut and risk of a second flush of seeds may occur." Fire has also shown to be ineffective in means of control. Chemical application seems to be the leading approach for Ventenata management. "One of the things we're asking of landowners, is to check to see if you do have this growing on your land, and to map where you have found it," Thurston noted. GPS points and pictures will be helpful when reporting your findings.

Call the Sanders County Weed Department or Montana Department of Agriculture to report ventenata. You can also contact Juli Thurston for more information regarding this invasive weed at (406) 827-6934 or [email protected]