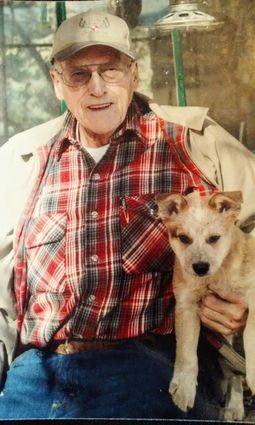 John Nelson, 87, of Plains, passed away at his home on Thursday, November 7, 2019. John was born on December 26, 1931 in Missoula, Montana, the son of Inez and Donald Nelson. He grew up in several logging towns in Idaho where his father worked, eventually moving to Plains in 1943. On January 1, 1944 the family moved to the Nelson Ranch where John spent his life.

John graduated from Plains High School in 1950, followed by three years in the Coast Guard. He then attended Washington State University (WSU), where he met, fell in love with and married the love of his life, Patricia Houston. They were married in Okanogan, Washington, on December 27, 1955. They then returned to WSU, where John graduated in 1958 with highest honors with a Bachelor of Science degree in Agriculture.

John and Pat returned to Plains where they had three daughters: Lorna, Teresa, and Pam. They worked together on the ranch raising registered Polled Hereford cattle and various crops. John was dedicated to his family and the ranch. He loved the outdoors, especially fishing – a love passed to his daughters and eventually his granddaughters. John enjoyed time spent on horseback working the cattle, he was an avid photographer and loved reading.

John was preceded in death by his parents Donald and Inez, his wife Pat and his brother Bruce Nelson.

Services have already been held.