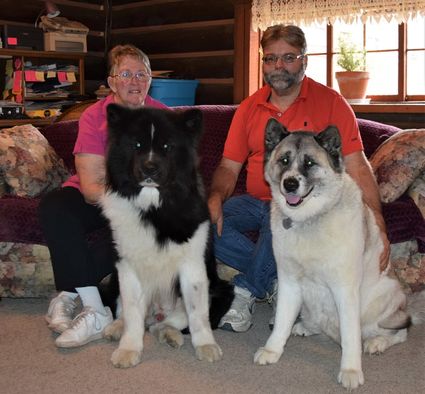 GENTLE BEARS - Brenda and Scott Crowe, owners of Redemption Ranch in Thompson Falls are passionate about the healing effects their dogs Zachariah (black and white) and his mother Bubbles have on those who visit the ranch. The lineage owned by the Crowes goes back to Bubbles' mother, Danni.

If you ask Scott and Brenda Crowe, God gives every living thing a purpose. According to them, their Akita dogs provide healing, laughter and compassion to those who visit Redemption Ranch, the Crowe's Christian-based, healing resort.

Although all the Crowe's Akita pups have been special, one has particularly touched their hearts. Zachariah is a 2-year-old, long-hair, black Akita with white markings. He has recently gone through what the Crowe's call a miracle and are extremely grateful for veterinarians Dr. Kathryn Hawkins and Dr. Abby Ingram, and the staff at Thompson Falls Veterinary Clinic.

Last February, Zachariah had to undergo knee surgery to fix a torn cranial cruciate ligament (CCL). In humans, this is known as the anterior cruciate ligament (ACL). The ligament was compromised when Zachariah was playing with the Crowe's horse, Duke, and was kicked in the knee. The surgery was a success, except that he overcompensated with his opposite leg while healing and therefore, injured his other CCL in the process. The Crowe's returned to Washington State University in Pullman, Washington to have his other CCL repaired.

"Zachariah did not do well and obviously was in distress as the days went on," stated Brenda of the second CCL surgery. He was limping and "toe tapping" due to the pain he was having in his leg, prompting the Crowe's to take Zachariah to Ingram in Thompson Falls. A sample was taken of the discharge coming from the surgical incision and sent to the lab for culturing. The test came back positive for MRSA (methicillin-resistant staphylococcus aureus), a strain of staph that is very difficult to treat and resistant to many antibiotics.

Although the infection improved, Zachariah struggled with leg mobility. The Crowes took Zachariah back to Pullman once more to explore the idea of removing the implants placed in his knee. It was determined that he should continue with antibiotics and anti-inflammatories, and continue to rest, Hawkins commented.

"Zac slowly improved and regained use of his leg as the pain resolved," shared Hawkins. However, two months later he started to go downhill and stopped eating and drinking.

The Crowes contacted Thompson Falls Veterinary Clinic once again and Hawkins examined Zachariah that day. Blood work showed Zac's levels to be normal, so she proceeded to take x-rays which revealed a large mass in his abdomen.

Neither Ingram nor Hawkins could determine what the mass was. "Since it was late Friday afternoon," said Brenda, "we all decided to have him rehydrated, put him on more antibiotics and go home for observation and decide if we wanted her (Hawkins) to come in on her day off to operate and find out what the mass was.

"Sunday, we called her and told her we wanted to operate on Monday," Brenda emphasized.

Hawkins opened Zachariah up and was "shocked at what she saw," shared Brenda. "It was not a mass. It was his left kidney, extremely enlarged to about three times normal and his ureter was also very enlarged." The kidney and ureter had to be removed, a rare, difficult and risky surgery.

"It was a very intense, three-hour surgery," said Hawkins.

The Crowes admitted they were fearful. The danger was that in trying to get to the area she needed to work on, she had to work around the artery that comes from his aorta directly to his kidney. If Hawkins accidentally cut the renal artery, Zachariah could bleed out.

Brenda and Scott were faced with a difficult decision. They could move forward and have Hawkins attempt to remove the damaged organ, or they could have her suture him up and rush Zachariah to Missoula where a more experienced surgeon could perform the removal.

Based on their interactions with Hawkins, the Crowes believed in and trusted her. They chose to have Hawkins perform the surgery. "She did a phenomenal and superb job," the Crowes delightfully agreed.

The kidney was so damaged the enclosing wall was extremely thin. Hawkins was surprised that it had not burst open. Tissue samples from the kidney and ureter were sent for biopsy. There was severe inflammation in the ureter which had led to blockage of the urine flow from the kidney, causing it to enlarge and destroy the kidney tissue. While the cause is not certain, doctors agree that the MRSA infection from the knee may have circulated to the kidney causing the damage. "The kidney was destroyed," Brenda said. "The danger now is that we have to protect the other kidney and heal the resistant MRSA."

Zachariah visits the clinic regularly for blood draws to monitor the function of his remaining kidney. He remains on long-term antibiotics in case there is residual infection, according to Hawkins. "He felt so much better to have the kidney out that he doesn't realize how sick he still is," the Crowe's said with sorrow.

"He has been through a lot for such a young dog," shared Hawkins, who is glad Zachariah is recovering. "The Crowes obviously love him very much."

Brenda believes this was God's plan and Zachariah was brought to them by His way. "In 2008, the Lord spoke to me to tell me I would have one more male Akita puppy," she stated. "His name would be Zachariah Yeshua's Yoshi Kuma (meaning: God has remembered Yeshua's gentle bear). He would be black with white markings.

The Crowes are praying that God will once again answer their call and heal Zachariah, their gentle bear.