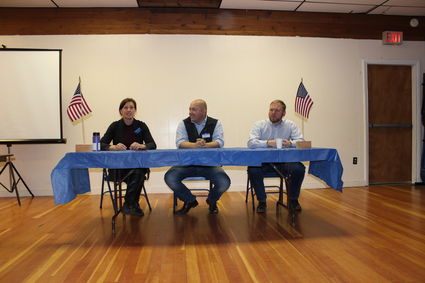 Mindy Ferrell, a member of the Sanders County Democrats, announced that each candidate would get 10 to 15 minutes to speak, followed by a 30-minute question and answer section from the audience. While there were about 25 people in attendance, Ferrell did mention the various community leaders and businesses she invited to the meet and greet.

"I call them the county VIP, and they're invited to everything we do," Ferrell stated. Among those invited were representatives from Blackfoot Telecommunications and NorthWestern Energy. Ferrell continued, "their questions could help educate us all. I think it's critical to learn about the issues of the people out in the field."

The discussion began with Casey Schreiner, who is running for governor. "I am a lifetime Montanan, a farmer and a public school teacher; but first I am a husband and a father." Schreiner touched on three main points in his discussion: his plan to protect affordable healthcare, rebuilding Montana's infrastructure and better access to early childhood education.

Monica Tranel, who is running for Public Service Commission for District four, wants to "make Montana a clean energy leader in today's economy." Tranel stated, "We can't change the world, but together we can change our world. Our children deserve a future, that's why I'm running." While Tranel's talking points tied in with climate change, she focused on speaking to the group about her ideas on renewable energy, which included solar and wind farms.

John Mues, who is running for a seat in the U.S. Senate, was the last speaker for the day. "This is out of a deep seeded love for my home state. I understand the challenges good, hard working Montanans go through," he told the crowd. Mues talked about the need to protect public lands, livable wage jobs and affordable education with properly funded schools for all children in Montana.

After each candidate had their chance to speak, the floor was opened to the public for the question and answer portion of the event. The first question came from Tom Eggensperger, board president of Blackfoot Communications. Because Eggensperger couldn't attend, Ferrell was given permission to present his question to the candidates. "Do you believe that broadband is an essential part of the state's infrastructure, and if so, what is the state's role to ensure all Montanans have affordable access to high quality broadband."

A collective yes to broadband infrastructure for faster connectivity was given by the group, as well as the agreement that Montana is ready and capable for 5G. Other questions that were asked included thoughts on climate change, recycling and healing the gap between the two parties should the candidates get elected. The meet-and-greet ended with a mingling session of the candidates and all who attended.