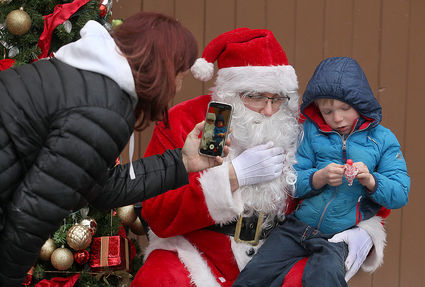 CHRISTMAS EVES DROPPING – Deedee Haines leans in to take a photo and listen to what her son, 4-year-old Brody Haines, tells Santa what he wants for Christmas. "He asked for toys for his dog," said Deedee. Brody lives in Ronan. His grandparents are Bill and Doris Haines of Plains.

The parade through Plains from Central Avenue to Hubbard Street Saturday lasted only two minutes, but nearly 100 people lined Railroad Street to see Santa Claus on top of a fire engine.

This is the third year for the Family Fun Community Christmas Event, formerly called the Christmas Extravaganza. Santa and his elf, Whitney Tanner-Spurr, tossed candy to kids from the 1968 Plains-Paradise Rural Fire District engine as it made its way through town. The fire truck was one of five participants of the parade, which included a 2013 fire engine and a Plains Lions Club recruiting float driven by Ron Robinson.

Dressed in old-fashioned Christmas clothes, Plains resident Marv Tanner and his wife, Margo, were driving a push peddle car, which was also part of the Lions Club. Cliff Stephens of Paradise pulled a United Methodist Church hayride trailer, where his wife, Judy, Butch Murdock of Plains and Plains United Methodist Church Pastor Ashley Hawkins sang Christmas songs. During the parade this year, Matt Jaramillo, owner of Big Sky Networks, set up a sound system to play Christmas music. After the parade, Wiley Scribner and Chelsey Standeford played and sang in front of Garden, Gift & Floral for a short time.

Santa - aka Steve Spurr - got dropped off at the McGowan Mall, where 40 kids sat on his lap to tell him their wants for Christmas. Four adults also sat on his lap. For the first time in his three years playing the jolly old elf, he received gifts from kids. Four-year-old Brody Haines of Ronan gave Santa a roll of Scotch tape and a sucker. His grandparents, Bill and Doris Haines, are Plains residents. Jace Russell, 6, of Plains gave him a wooden snowman tree decoration. 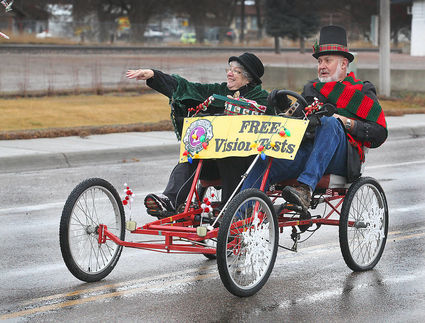 Brittany Riddle of Little Bird Photo Montana shot free photos of Santa and the kids sponsored by McGowan Grocery, said Erika Lawyer, Mountain West Clothing and one of the event organizers. Santa also spent a couple hours and had five children at Ripples Ice Cream Parlor tell him what they wanted for Christmas.

Briana Rivinius for the second consecutive year opened her shop, Hello Sweetness Designs, for crafts for the kids. Twenty-seven children from 2-12 years old made sticker foam Christmas tree decorations. Kids had their choice of making a puppy, gingerbread house or a snow globe. Rivinius said the dog was the kids' favorite. She also provided hot cocoa and candy canes. Her daughters Annika, 13, and Emilia, 10, helped the children with the crafts. Rivinius and Steve Spurr also helped coordinate the annual event.

Rivinius and Lawyer felt this year's event went well. Lawyer thought there might have been more people this year and hopes it will grow even more next year.