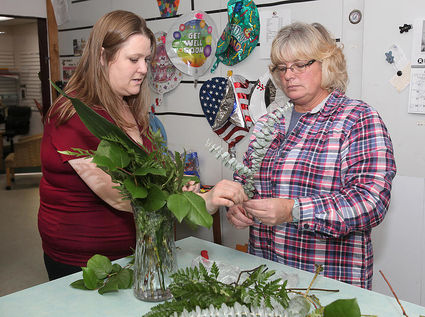 The flower shop and the liquor store in Plains are under new ownership, and once again, the owners are local. John and Kim Revier of Plains had their first day in their new place, Garden Gift & Floral and Plains Liquor Store, on Dec. 10.

"I'm super excited about it," said Kim, who will be working mostly in the flower shop while John will concentrate on the liquor store when he's not involved in his business, J&K Trucking, which he has owned for more than 25 years and plans to continue. The new business also includes Jim's Formal Wear, a tuxedo rental shop. The Reviers officially took over on Dec. 9, but because the shop is closed on Mondays, they didn't physically start until the next day.

The businesses have been previously owned by Patty Coe for the last 11 1/2 years. She purchased the business from Doug and Becky McDonald. "I'm getting too old, that's the bottom line. I'm going to be 74 and it's time someone younger to take over," Coe said.

Coe was especially pleased that the Reviers bought the business, in part because they're locals, and because she believes they will be good for the business. "People know them because they were born and raised here. I want them to do good and I'll help them anyway I can," she said. "I'm leaving it in good hands."

The Reviers discovered that Coe was interested in selling the business several months ago and let her know they were interested. Coe said there were two other interested parties, but both changed their minds and the Reviers started the paperwork on Sept. 1. Getting the liquor license was the biggest holdup, due to the comprehensive background check by state and federal governments.

The couple has been training at both shops for about a month. John began learning the ropes at the liquor store just over two months ago. His biggest learning curve was the computer system and the ordering procedure. He has spent a lot of time studying the stock, how to order, and what the customers - individuals and local bars - routinely purchase. Although he had been slightly apprehensive about buying the business, being an already established enterprise in the community and the only liquor store in Plains, made it easier, he said.

"We've got a captive audience. We have five bars here and they all get their liquor from here," said John. It is also the only flower shop and tuxedo rental in Plains. The closest competition is in Thompson Falls.

Kim was excited about taking over Garden Gift & Floral, but she's no stranger to working with flowers. She was employed as a florist in Great Falls for awhile in the early 1990s, but she never considered owning a flower shop. Kim has spent the last 11 years at McGowan Grocery, and for the last three weeks has been brushing up on making different floral arrangements with Katie Coe-Gonce, Patty's daughter and her helper for about 10 years. When not working at the grocery store, Kim was at the flower shop three or four times a week, for three or four hours each day, learning how to make different flower arrangements.

The shop does floral designs from small boutonnières to large arrangements. The flower shop also sells baskets, knickknacks, plants, and a large assortment of foil and latex balloons.

"I think this is great. I'm my own boss and John's my partner," said Kim, who doesn't plan to change anything at the shop, at least not right away. "We want to keep the majority of the business the way it is because it's an established business," said Kim. John agreed, saying it makes no sense to change a successful business.

Though the shops are normally closed on Mondays, the Reviers plan to be open for the next couple of weeks. After the holidays, the business hours will be Tuesday through Saturday 10 a.m. to 5:30 p.m.

Because Christmas is the busiest time of the year, Coe and her daughter plan to help the Reviers for the next few weeks, something the Reviers are happy about. "She's such a great help. She's a lifesaver," said John. "I've got Patty on speed dial."