Students put to the test 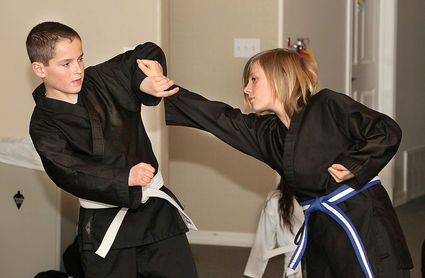 STOPPING A PUNCH – Eleven-year-old Gavin Hafter demonstrates a block against Jasmine Trull during his testing for his yellow belt.

Most kids don't get a kick out of taking a test, unless it's with the Blue Heron Karate Academy in Plains.

Fourteen youngsters and one adult were promoted to the next belt level at Clark Fork Valley Hospital building one last Monday. The kids' ages ranged from 6 years old to 12 and their belts went from yellow to purple, said Jason Williams, the club chief sensei and one of two judges for the testing. Also judging was black belt holder Chloe French, 16, also a sensei, the Japanese word for teacher.

One at a time, the students approached the judges, bowed and stated their name, their club name and what "kata" techniques they would be demonstrating. Williams and French evaluated their moves and quizzed them about the sport of karate and some of its terminology. The students demonstrated individual moves and showed punching and blocking moves with the help of club members Jim Hanson, Matt Cooper, Aaron Trull, Jasmine Trull, and Kaden Trull.

Williams created the Blue Heron Karate Academy in 2014 and now has 27 students - 23 kids and four adults - from Plains, Paradise, and Thompson Falls, including four black belts. The kids' ages range from 5-15. "We are at our highest this year with students coming from Thompson Falls," said Sandy Chenoweth, the club's secretary and grandmother of some of the members. She said the club has two new white belt (beginner) members, who joined two weeks ago.

The 42-year-old Danice Toyias, a teacher in Thompson Falls, said that her son, Jonathan, motivates her to train. The two joined the club in January and practice on a regular basis. She said they practiced their katas 10 times a day from before breakfast until after dinner. Danice was the last student tested and was a little nervous while waiting her turn. Jonathan said he'd like to be a black belt by the time he turns 13. 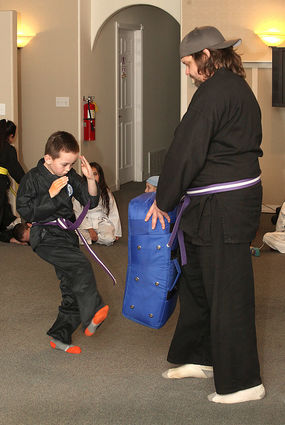 The level of examination and testing, even for the same belt, was based on their age, said the 51-year-old Williams, who's been involved in karate since age 12. "We want to work them outside their comfort level, but we don't want to frustrate them," he said. "Testing is really a personal choice and is different for each student," said Chenoweth, who added that yellow belts usually test within a couple months, but after that it varies a lot. "Karate is a growing process, so people advance at their own pace," said Williams.

Williams said karate is very good for kids because it teaches them self defense and self discipline. "It teaches kids respect, focus and goal setting," said Williams, pointing out how well-behaved they were during the testing. "They must show good karate spirit, which is being respectful, compassionate, diligent in training, and retain a positive attitude," said Williams.

The club meets on Mondays at the Clark Fork Valley Hospital's building two for beginners from 6-7 p.m. and advanced members from 7-8 p.m. Williams said he appreciates the hospital use of the building. The cost to join the club is $25, but only $5 for a second and additional family members. Williams hopes to have a karate tournament in the spring, probably at the fairgrounds pavilion, where the first one was held.