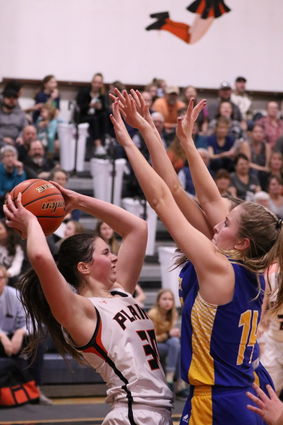 BOXED IN - Trotter Kylee Altmiller looks to pass the ball off as Belle Cooper and another unidentified Lady Hawk defend.

The more basketball the Plains Trotters play, the better they get.

Back in District 14C league play this week, Fultz and his Trotters will host St. Regis Thursday and visit Hot Springs Friday.

Fultz thinks the Trotters have a perception problem when playing Thompson Falls. A large contingent of Hawk fans followed their ladies up the Clark Fork for Friday's big game, bringing enthusiasm and lots of noise with them.

"We may need to rethink games with Thompson Falls," he said. "They still treat the Plains-T-Falls game as a rivalry game, and it seems like we don't since we moved to Class C.

"Whatever it was, it seemed like they were way more up for this game than we were," he added, "and it kind of got away from us."

Even if it was a loss to the newly re-hated Hawks, it still was only a non-conference loss in the grand scheme of things.

"We are pretty young at some key positions but are going to get better as the season progresses," Fultz said. "A game like this might not get away from us when we get a little more experience under our belts."

Youthful exuberance also played a role in the Trotters' closer-than-it-should-have-been win in Darby the next day.

"We got way up and they came back," Fultz said. "We were up by 11 early in the fourth quarter but it ended up getting pretty tight at the end. Again, I just think it is a youth thing, we need to go through things like this together to be able to realize what we need to the next time."

Altmiller again led the Trotters in Darby with 17 points, Standeford added a career-high 10, Curry eight, VonHeeder four, Cole and Tianna McGongale two each and Loberg and Boes one per player.