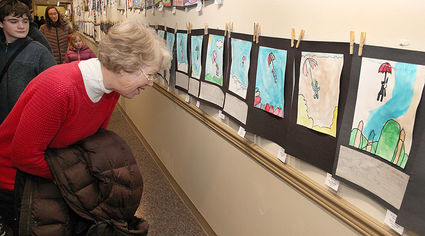 Plains resident Sherrie Johnson reads one of the stories that accompany the "Up, Up, and Away" project by Lindsey McGee's second grade class.

Drawing pictures can be kid stuff, but when it comes to the Art on the Walls program at Clark Fork Valley Hospital (CFVH), the children's show is the most popular one of the year.

Nearly 150 people showed up for the Sanders County Arts Council's (SCAC) Art on the Walls Student Show reception at CFVH last Tuesday evening. One hundred and ninety-four students from Plains and Noxon schools from kindergarten to seniors displayed their artwork this quarter, including one Noxon home-schooled student, Emma Baldwin, who did a needling felt piece called "The Set of Autumn." Joy Nelson, SCAC president, said it might have been the first needling felt work they've shown. Fifteen students from Noxon High School participated in this year's exhibit. Altogether, there were 222 works of art displayed along the hospital's "Main Street Hallway."

"I see a variety of art and a lot of new types of projects this year," said Tonya Revier, Marketing and Community Relations Coordinator for the hospital. Her two Plains Elementary School children, Jackson, a third grader, and Palmer, a first grader, participated in the exhibition. "I think it's neat to see all the kids and their parents from around the county come in and enjoy the reception," she said.

The hour-and-a-half reception included snacks from Brenda Haase's Hot Springs High School Savage Heat Cafe culinary class and music from Sydne Connolly's piano students - Ashley Ferlan, Claire Wrobleski and Katherine Wrobleski. Mason Gannarelli of Plains played his electric guitar for the crowd. First graders from the classes of Denise Montgomery and Wendy Tulloch sang "The Star-Spangled Banner" and "My Home is in Montana" to kick off the event.

"I think this is the favorite one for the community," Nelson said. SCAC and CFVH co-sponsor the show. It took Nelson and committee members Arlene Littlefield and Ilene Paulsen more than two hours to set up the display, which will be up until March 17. People can vote for their favorite artwork at each show. The winning piece is featured on the cover of the next quarter's program. Paradise resident Steve Eberhardt won last quarter's People's Choice with his acrylic on canvas painting entitled "Shadow King."

The exhibit, which began in 2007, was the brain child of Gayle Kenney, who was a patient of the hospital at the time. The student's quarter didn't begin until 2009. The idea for the exhibit was to highlight local talent and to decorate the bare hospital walls to hopefully help patients take their minds off their medical problems. A new display is put up each quarter starting with the student show in January.

The students demonstrated a variety of art mediums - colored pencil, graphite, ink, charcoal, marker, crayon, paints of watercolor, acrylic and oil, along with weaving, photography and mixed and multimedia. There were also a variety of subjects - mittens, self-portraits, gnomes, sports logos and animals. Meg Feist's second graders did a comparative study of the artistic style of Brazilian artist Romero Britto and Dutch painter Piet Mondraian and applied the artists' styles to a colorful fish design with pencil marker.

Nelson said this was the first time for the show to feature papier-mache art, which was done by Plains High School junior Chloe French with her artwork titled "Greater Kudu" and seniors Meriah Morman with "Oh Deer" and her twin sister, Meranda Morman and her work, "Quilt-A-Bear." Another first were three wood burning projects by Plains sixth graders Arrow Hyde with "Explore More," Chance Angle with "Bear Paw" and Antoine Wyatt Schaff with "Bobcats Logo." 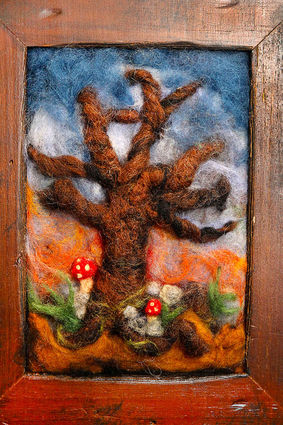 "The Set of Autumn," (left) by Emma Baldwin from Noxon, was the show's first needling felt piece.

"There's some really nice work from all the schools. I'm excited to see how this came out," said Kristen Cole, the Plains High School art teacher. Cole was impressed with the work of Tia Bellinger, a fourth-grade student from Plains Elementary School. She did a mixed media piece called "Minx the Caribou" that was a mixture of watercolor, graphite, colored pencil, oil and pastel. "I see a lot of potential in her; she's good," said Cole. She also specifically liked the work of Kaedin Jurek, one of only two eighth graders from Plains to show their work. "His ability to use the marker is just incredible," said Cole, who added that Plains High School will host its annual student show at the school sometime in May.

"I like the stories that go with the art," said guest Sherrie Johnson, referring to Lindsey McGee's 14 second-grade students, who all did a watercolor project titled "Up, Up, and Away." Each student painted a person floating through the sky with an umbrella. Each entry had an accompanied written statement. Justin Crane wrote: "When I found a magical umbrella I ruled all the mony (money) in the world." Brooke Ferlan's statement was: "When I found a magical umbrella I turned into mare popins (Mary Poppins) and flew out to the sky."