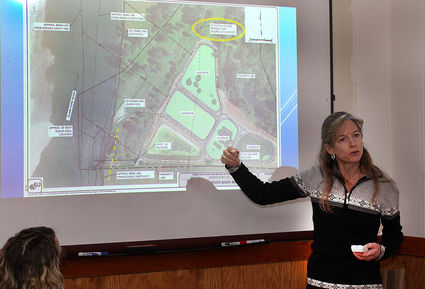 The Plains Council voted last Monday to accept one of three plans to relocate the town's lagoon to a site that wouldn't be impacted by the Clark Fork River.

Shari Johnson, the town's engineer consultant, gave an hour-long briefing to community members and the council just before the regular council meeting. Johnson gave three scenarios, which gave the estimated cost of construction and the annual operating costs. The option the council selected - "Alternative 4-Rev" - called for an aerated lagoon with a continuous discharge, the same procedure used now, at a cost of $5.3-million and an annual operating and maintenance cost of about $145,000.

The town's present lagoon, located at the end of Helterline Lane, was created in the mid 1980s with about 65 acres of land, but Rowan believes there's is presently only about 40. The lagoon has been losing shoreline to the Clark Fork River every year. The river has come to within 25 feet of the treatment plant UV facility. The mayor said they lost a lot of ground in 2018, when the river swept away 47 feet of shoreline within a two-week period. The U.S. Army Corps of Engineers had to be called to place tons of riprap along the shoreline of the lagoon property and that of resident Randy Garrison, the adjoining property.

Town officials looked at the idea of installing a steel barrier between the river and the lagoon, but Rowan said the water would work its way around the barrier, which would have to be constantly extended. He said it would eventually cost the same as moving the lagoon.

"We know a flood is coming, we just don't know when, but it's coming and it won't take a lot to take out the lagoon," said Johnson, an engineer for 26 years. She has worked on similar projects for a handful of small and large communities across Montana. "We're at the mercy of Mother Nature. It needs to be moved as soon as possible," said Johnson.

Another of the options, Alternative 4A, called for 20 acres of land for treatment purposes and 80 acres for land application at an estimated cost of $5.8-million and an annual operating cost of $150,000. Option Alternative 5's wastewater treatment plant called for a continuous discharge mechanical plant using a modified Montana Pollutant Discharge Elimination System permit at a cost of $7.8-million and a yearly operating cost of $300,000, but it would require only five acres. Rowan, who doesn't vote on the council, except in a tie, believes they voted on the right option.

Rowan said they're looking at three different property sites west of town. He said they need 10 acres and an access road. One issue in moving the treatment plant west of town is the airport. Because the lagoon ponds are open water, they tend to attract birds, which could be a safety problem for aircraft. Nets or covers could be placed on the ponds as safeguards or they could be made turbulent to deter birds.

The town is counting on grants to pay for the move. They've already received $300,000 from the U.S. Army Corps of Engineers, $500,000 from the Treasure State Endowment Program, $450,000 from the Community Development Block Grant, and $125,000 from the Renewal Resource Grant/Loan. Pending grants include one from FEMA for just over $5.1-million and $750,000 from the Delivering Local Assistance Program. In addition, the town is looking to receive funds from the State Revolving Funds, which sometimes provides money not covered by other grants or loans.

The council unanimously voted to pass the first reading of an amendment to the ordinance to change sewer rates in an effort to make it more fair for residents. Presently, sewer rates are established in April for the next year based on an average water usage between Nov. 15 and April 15, a time when residents are not using water for gardens and lawns, which doesn't go through the sewer lines for treatment. The proposed amendment was prompted by people with leaks and with the increase in water and sewer rates, it was a substantial hike. "Even though it was a limited number of people, it was a real problem and it was fundamentally unfair," said Mayor Dan Rowan of the present billing procedure.

With the present billing plan, if a resident had a leak, he or she had to wait a year for any type of possible recourse. With the current plan, a six-month average period determines a 12-month payment period, said Rowan, who added that under the proposed amendment an eight-month averaging period will determine a four-month payment period. "The other eight months of the year, people will be charged the actual water usage month by month. In other words, four months will be based on water usage that wasn't used outside, like gardening, which is water usage that doesn't go down the drain and is treated," he said.

"The new ordinance will limit the amount of months that you can be negatively affected by a leak in your averaging period."

Rowan believes this is the best way to determine billing outside installing sewage meters at each residence, which would be cost prohibited to the town and residents. The proposed amendment was written by the council's public works committee members Joel Banham and Connie Faust. The first reading was quickly passed. The council would like to have the second and final reading this month. It would go into effect 30 days later. 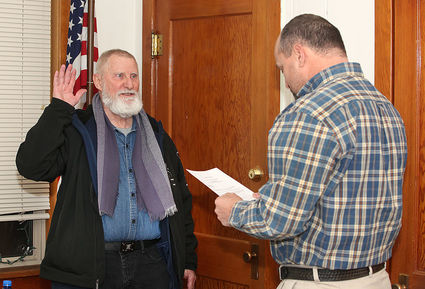 Also at the meeting, John Sheridan was sworn in as the newest member of the council, serving Ward 2. The 72-year-old Sheridan was the only person to show interest in the position. Like Connie Faust, who was sworn in for Ward 1 last month, it was initially thought Sheridan was in for a four-year term, but the county notified the town that if a person is appointed rather than elected, he or she would only be in office until the next election period, which means both would need to compete in the 2021 election.

Sheridan has lived in Plains since 2007 and has served as a volunteer on the Plains Community Ambulance Service, the Sanders County Transportation Service and the Plains Paradise Senior Center. Sheridan said he wanted to contribute more to the community. The next council meeting is scheduled for Monday, March 2, at 7 p.m. at City Hall.