Best at the Bee 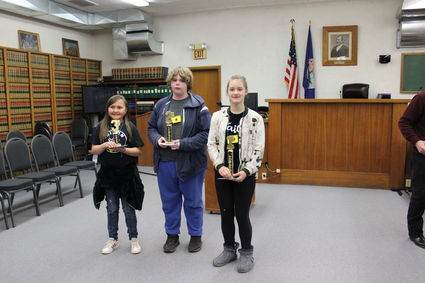 The pronouncer for this year's spelling bee was Dan Whittenburg, who has been the pronouncer now for more than 20 years. Sara Czerwinski who is the county Bee Director, also served as one of the judges. Michael Scharfe from First Security Bank, served as a first-time judge for the spelling bee this year; and the last judge was Karen Dwyer, whom according to Wooden, is a spelling bee legend.

Around 30 family members and friends gathered to watch the 16 spellers, compete for first place. Wooden brought up the spellers and explained the rules as well as the process in which the spelling bee would be conducted. "The winner of today's spelling bee will get a chance to compete at the Montana Spelling Bee, which is going to be in Bozeman on March 14. If the qualified person cannot attend, then the alternate will attend in their place," Wooden stated.

The top three finishers all received trophies for their efforts, which are sponsored by the Ledger. The finishers also received gift cards from First Security Bank. As Wooden wished everyone good luck, the spelling bee officially began. 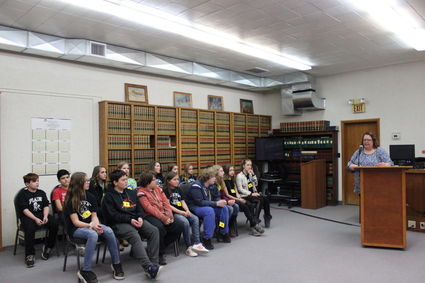 Contestants listen as Annie Wooden from The Sanders County Ledger reads the rules of the county spelling bee last Friday at the courthouse in Thompson Falls.

Taking third place was Lucy Metcalf, a fourth grader from Dixon. Metcalf made it to the seventh round, with the misspelling of the word "squirm" disqualifying her from the spelling bee. Gage Todd, a seventh grader from Trout Creek, took home second place in the competition. His final word "pattern" in the ninth round, was misspelled, disqualifying him from the competition. Naoma Knudsen, a sixth grader from Hot Springs, made it all the way to round 10, taking first place and winning the spelling bee with the word "penguin."

Spellers and their grades included: