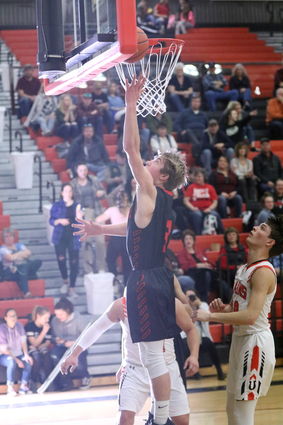 UNDER THE BRIGHT LIGHTS of tournament play, Hot Springs sophomore Jack McAllister goes up for a shot during action in the District 14C tourney in Ronan several weeks ago. The State C and State B tournaments will be played in Butte and Missoula later this week.

Hot Springs senior Brandon Knudsen is not quite done with high school football yet.

A multi-sports star for the Savage Heat throughout his prep career, Knudsen has been named to the Red team for the 24th Annual 6-Man All-Star football game in Highwood May 30.

An All-Western C and All-State C selection for the Savage Heat last fall, Knudsen will be joined in representing Hot Springs in Highwood by coach Jim Lawson, who was selected as an assistant coach for the Red squad.

Big Sandy's Larry Jappe will serve as the head coach for the Red, and he will be assisted by Lawson, J.R. Johnson of Westby-Grenora and Mitch Ward of Shileds Valley.