Dedicated to the outdoors 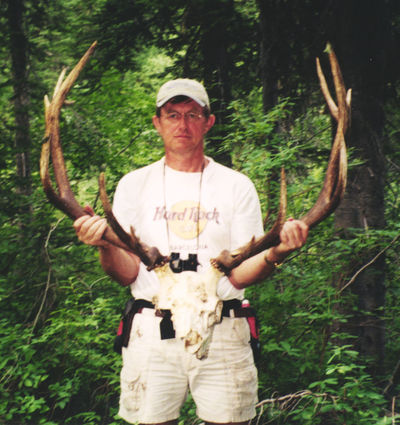 ANTLERS, LOVE AND WILDERNESS – By Sandy Compton, tells the glorifying story of this trophy elk find. Compton, who resides in Heron, is an established storyteller of the outdoors. He has many published works and has recently retired after many years serving as program coordinator for the Friends of the Scotchman Peaks Wilderness.

After serving over one decade as Friends of Scotchman Peaks Wilderness Program Coordinator, Mitchell "Sandy" Compton has decided to pass his hiking boots and backpack of duties on to someone else. As of March 2020, he has officially retired.

"I've repurposed," shared Compton. "I am not going to sit in my rocking chair and watch the world go by." If you know Compton, you also know this to be true. "I'm pretty good at doing nothing," he guffawed, "but that doesn't happen very often."

One set of plans are to spend more time on his publishing company, Blue Creek Press. "I've got a bit of interest in people who want books done, so Blue Creek Press has some work to do." In addition to press operations, Compton will continue to write, but only when paper and ink is calling for him. "I cannot force myself to just write a book," he admitted, sharing that he does have a few works that he intends to finish...someday.

As far as interaction within Friends of the Scotchman Peaks Wilderness (FSPW), Compton has visions of creating podcasts and creating video and voice recordings but will be backing away from his former duties within the organization. "They have hired a replacement for me." Compton has complete confidence in his trail-work replacement, Autumn Lear, and stated he will not hang around and "get in the way" of her efforts. After all, "I have had this job for 10 years, the longest I've ever has a job," Compton admitted. "I'm kinda pleased I don't have it anymore," although he confessed, he will truly miss the trail work and is rather proud of all the accomplishments the crew made in the last decade.

Proving he is no stranger to the Scotchman Peaks area, Compton's grandparents fashioned their home at the base of the Peaks in Heron, Montana, in 1916 when they purchased the parcel from Northern Pacific Railroad and moved from Kansas.

"My grandmother and the rest of my nuclear family I guess," responded Compton when asked who was responsible for instilling his love of and respect for the land. "My grandmother was an eclectic woman, ahead of her time." She was an amateur geologist whose rock collection was inherited by Eastern Washington University, upon their request, according to Compton. He said he remembers spending rainy days at his grandparents' house, located up the hill from his home, travelling the world through National Geographic volumes. On days when it wasn't raining, you guessed it, Compton was out exploring nature, the nature of the Scotchman, his own backyard.

"As a kid, you just can't do it without falling in love with the place," he said of the deepness felt for his childhood stomping grounds, of which he was given the "freedom" from his parents to explore. "You appreciate it so deep." Strange as it may be, as a kid it lives in your heart and soul. As an adult, it has matured, taken hold and becomes who you are. The Scotchman Peaks are responsible for who Compton is. Rather likely, the Peaks allowed Compton to understand who he truly is.

With love and admiration for the location, Compton cherished the family homestead and has made it his own. In addition to working more with publishing, he plans to continue working to make improvements on the house he has spent so many years making his own; reflecting gratitude for all that it has bestowed upon him.

Compton has lived a life dedicated to wilderness awareness and outdoor education. He was a key figure in developing the Winter Tracks program that now reaches grade school-aged students throughout Montana, Idaho and Washington. Every winter, the program brings students together for a day of outdoor education. The fieldtrip is a highlight thousands of students look forward to, including seventh graders in Sanders County. He has been awarded the Axline Award for Environmental Activism in 2018 and the Montana Wilderness Association Brass Lantern award in 2016, two further proofs of his love for the outdoors.

The pleasure of no longer working is understandable considering Compton's first job was at the youthful age of 10. He began working for his grandmother so he could earn money to refurbish and old horse saddle. Shortly after this stint, he became a paperboy for The Spokesman-Review in Sandpoint, Idaho. That was the beginning of a career in print. He worked for the Las Vegas Sun, Bonner News Digest, Sandpoint's Newsline, Snow News (Schweitzer Ski Resorts' monthly circulation), The River Journal (with the late Dennis Nicholls), for Friends of the Scotchman Peaks Wilderness (developing brochures, fliers, and promotional materials) and not forgotten are his own written works (multiple stories, poetry, columns, etc.) and publishing company, Blue Creek Press.

Compton hopes the Scotchman Peak Wilderness never changes. To him, the area is sacred land and should be left alone. Left to be what it is, what is does on its own. "It can kick your butt, and that reminds me that sometimes life is a struggle." Compton added that like life, getting off trail and experiencing the wilderness makes an individual "figure your way through it and find out what you are capable of."

As Compton turns another page and enters a new chapter in life, his very own words etched in The Scenic Route – Radar come to mind. "C'mon man. There's more to see. Let's go. We ain't got all day."