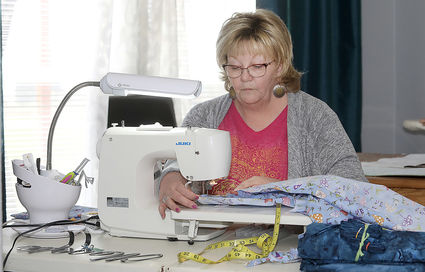 SEWING CAUSE – Mary Egbert of Plains sews a gown for Clark Fork Valley Hospital as part of "Victory Sewers of Sanders County" project.

Dealing with the Coronavirus isn't just so-so, but for a group of amateur seamstresses it's more sew-sew.

Nearly 45 people from the "Victory Sewers of Sanders County" are making gowns for the staff of Clark Fork Valley Hospital in an effort to protect them from the disease that has spread throughout the world, but has yet to impact Sanders County, said Janie Hom, the hospital's community health improvement specialist and the primary coordinator for the gown project.

The Victory Sewers of Sanders County started toward the end of March after a group of people in Sanders County formed to make protective masks. Hom's group is concentrating on gowns, but some of the volunteers are producing masks with the leftover materials, some of which are going to the Sanders County Sheriff's Office. The group is comprised of residents from Plains, Paradise, Thompson Falls, Trout Creek, and Noxon and is made up of all women sewers. Hom said there are a couple men in the group, but she wasn't sure whether or not they were sewing or helping in other ways.

"There is a shortage on supplies during this COVID-19 time from the manufacturers, so we are being pro-active with this cause so that the staff has them available for surgery, acute care, ER, and other staff that may need gowns," said Hom, who isn't one of the seamstresses, but has taken on the role of liaison between the group and the hospital. The gowns will supplement gowns the hospital already has, but supplies are now not as readily available as they were prior to the pandemic, said Hom.

The group has already made 90 gowns as of Tuesday, but their goal is 100, said Hom. They've also made about 500 masks, some of which might go to other places, such as the clinics in Thompson Falls and Hot Springs and possibly other emergency services personnel, such as ambulance and fire departments. Hom said the gowns and masks will aid the hospital to prepare for a possible outbreak of the Coronavirus. "Being pro-active is one of the most intricate parts of preparation with an upcoming unknown outcome of this COVID-19 virus. It's important we get through this together as a community, as a whole to stand strong," said Hom.

The gowns are being made in a variety of sizes from large to 3XL and would go over the staff members' clothes. The gowns can be washed and reused. Most are 100 percent cotton or a cotton-poly blend. Most of the masks were made based on a "Deaconess" pattern and some were made without an opening for a filter and some of them were made from a flannel material.

It was the hospital's chief nursing officer, Lisa Eberhardt, who initially asked for the gowns. Trout Creek resident Nanette Blake of the Sanders County Mask Makers on Facebook branched out to the eastern side of the county to get more sewers and the project began to grow by word of mouth, said Hom. Mary Egbert, one of the Plains sewers, has a tote bag for collecting donations on the front porch of Sunset Hills Funeral Home, located at 300 Willis Street in Plains and owned by Mary and her husband, Wayne.

Hom is uncertain how many pounds of material the group has received or how many people have donated, but she believes around 15 people have given them materials of different sizes and a lot of the seamstresses have used their own stashes. Deanna Lapierre of Plains donated one bolt flannel and about 75 yards of cotton material. Mona (Hill) Cox from Thompson Falls donated about 25 pounds of fabric. A woman from Plains and another from Paradise each received $250 community grants from Thrivent Financial, a nonprofit Christian organization, to donate to the cause.

Kathy Abarr of Zara Fiber Artistry, a Plains business, donated 10 1/2 yards of fabric, five rolls of elasticized cotton, 10 rolls of ribbon for ties, and three rolls of organic cotton fabric. Abarr said she donated enough material to a friend to make 276 masks that they gave to the hospital and handed out to several Plains businesses. Wal-Mart in Missoula donated around 25 pounds of material and Jo-Ann Fabrics and Crafts in Missoula gave 15-20 pounds, according to Hom, who added that some fabric was purchased by the hospital. Hom said they need 4 1/2 to 5 1/2-yard pieces of fabric for the 2XL and 3XL gowns.

Hom said she's received some "crazy wild patterns" even more than plain colors. She said they have lots of vibrancies and characters - Minions, bunnies, Star Trek and Christmas. "The fabric has more designs and colors that would brighten anyone's day," she said. "I gave them cotton print with dinosaurs for masks for the doctors to wear. That'll be fun for the kids to see on the doctors," said Lapierre.

The time it takes to make one gown depends on the seamstress, but Hom guessed that it's probably an average of a couple hours for each gown. Egbert said it also depends on the number of pieces of fabric the sewer has to use to make a gown. She said each gown usually has four pieces - front, back, and sleeves - along with elastic for the sleeves and four pieces for the neck and waist ties. "The sewers are the real important part of this because of the time and energy it takes to make these masks and gowns," said Abarr.

"This is amazing to witness and be a part of and makes me very proud to be in Sanders County," said Hom. "I love emotion and I have a lot of compassion for people and what is going on in our community so my position as the community health improvement specialist has already been fulfilling in such a short time all thanks to a great team here at the hospital and our local community coming together in this difficult time," said Hom, adding that when they get through the pandemic, they plan to have a "victory sewing celebration through a hospital and invite everyone who helped us."