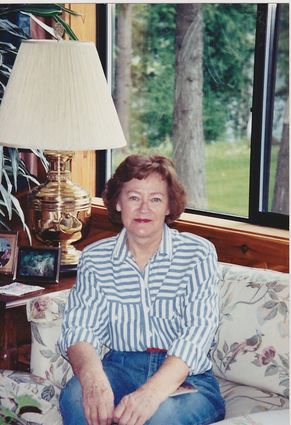 Ellie "Inez" Wates, age 87, of Noxon Montana, passed away on March 18, 2020 at the Cabinet Peaks Medical Center of complications from a stroke. In the week preceding her death, Inez was continually surrounded by her loved ones. She was born to the late Alfred Wesley Shelton and Gladys Marie Liston on July 17, 1932. They resided in Durant, Mississippi. Inez graduated from Durant High School and then attended Holmes Community College in Goodman, Mississippi. Inez's father died when she was a baby and Gladys remarried "Bud" King when Inez was a toddler. Inez spoke very fondly of Bud, referring to him as a "gentle, soft spoken man." Inez credited Bud with teaching her carpentry and shooting skills. Inez was called "Bo," as a child because she was such a tomboy and was known by this nickname in her hometown well into her adult years.

Upon leaving Mississippi, Inez trained to become an airline stewardess and was hired by Capital Airlines. Inez met Richard "Dick" Kean Willis on an airline flight she was working. They married in 1952 and settled in the Washington, D.C., area. They had three children: Richard "Rus" King Willis, "Donna" Maria Willis and Jeanne "Carol" Willis. In the early years of her marriage, Inez worked at the Pentagon as a secretary. She then became a full-time homemaker. She was a talented gardener, an active PTA member, served several terms as PTA President, had a very successful millinery business during the sixties, helped her husband host numerous Lion's Club events, served several years as a Girl Scout leader and became the first woman to lead a Boy Scout/Explorer Scout troop in the Washington, D.C. area.

In 1972, Inez and Dick separated, and Inez took courses at the community college to become a professional landscape designer. She went to work at Area Landscaping in Fairfax, Virginia, owned by "Byron" Ernest Wates. Inez and Byron married in 1979 surrounded by their collective five children. Inez became part owner of Area Landscaping and continued to grow the business after Byron passed in 1983. Eventually growing weary of being in a hard hat supervising a landscape crew, Inez retired from Area Landscaping and began her next venture as an Interior Designer with a Decorating Den franchise. In true "Inez style," her decorating business grew with equal success as her previous endeavors.

Then, in 1986 Inez sold her decorating business and her home in Fairfax, Virginia and partnered with her son, Rus to begin her greatest adventure. She moved to Noxon, Montana, where Rus, owned and operated a big game guide and outfitting business. Inez lived a primitive lifestyle, without running water or electricity, while Rus and Inez designed and built the Bighorn Lodge on the Bull River. Inez's attention to detail was unparalleled. An example of this was how the two-story mosaic stone fireplace design, mirrored the beauty of the breath-taking Berray Mountain out the windows behind it.

The Lodge opened its doors the Fall of 1987 and once again, Inez established a thriving business. Inez sold the Lodge in 1999. By that time, Inez's Easter brunches and weekend retreats were legendary. While Inez was running the Lodge, Rus was simultaneously growing his second business, Bighorn Botanicals. Inez became the Vice President and Secretary-Treasurer of Bighorn Botanicals where she worked until her recent retirement in 2019.

Inez lived by the motto, "Failure is not an option," a belief system she modeled for her children, grandchildren and great-grandchildren. Inez's attention to detail was equal to her tenacity and Inez combined these two qualities to create visual beauty with everything from her hats, to her homes, to her Lodge. Inez left a trail of beauty wherever she went.

Inez was preceded in death by her husband; Byron, her father; Alfred, her mother; Gladys, her stepfather; Bud, her nephew; Wesley Rasberry, and her lifelong friend; Kay Fisher.

A private memorial will be held at her son and daughter-in-law's home on Inez's birthday in Noxon, Montana. Per Inez's request, there will be no funeral, and no cut flowers, as "cut flowers wither." Instead, please create some beauty by planting a flower, shrub, or tree in her honor. Photos of plants and trees in Inez's honor can be emailed to [email protected], to be placed in a memorial album. Inez ashes will be spread in Noxon, Montana and placed with her late husband, Byron E. Wates at the Fairfax City Cemetery.

The family is grateful to the physicians, nurse practitioners, nurses and nursing assistants at the Cabinet Peaks Medical Center, who took loving care of Inez and helped Inez pass with grace and dignity.