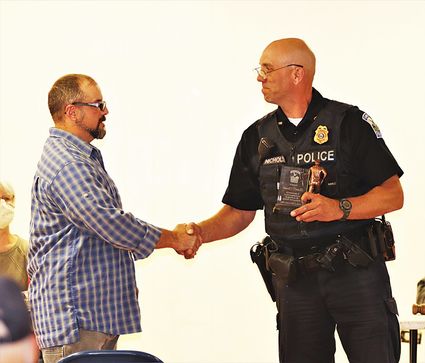 Officer Bob Thornhill was recognized during Monday's Thompson Falls City Council meeting for his contributions to the Thompson Falls Police Department (TFPD), as well as to the community as a whole. Officer Thornhill served in the Army for most of his life and came to Thompson Falls to settle down. He started in the area as detention officer, however, soon found himself serving as interim chief for around four months. He eventually moved into a position as the School Resource Officer (SRO) for Thompson Falls Schools.

Thornhill served with the police force in Thompson Falls for close to seven years, and throughout his time has applied his expertise with the Sanders County Search and Rescue, as well as taking on cases to aid in lessening the work load for the Police. The Thompson Falls Police Department currently has three full-time positions.

Working as the SRO gave Thornhill a unique perspective with the youth of Thompson Falls and he was able to fill in a detective-like position, investigating and building cases against child and sexual abuse. "He has made significant cases for the welfare of children," said TFPD Chief Chris Nichols. Thornhill took on these cases as, unlike with ordinary larger-town police departments, Thompson Falls does not have a detective unit.

Thornhill was given a plaque in recognition. He also gave a speech thanking all those who had supported him throughout the years, and especially his family. He ended that speech hoping he could be, and could continue to be, the man his family wanted him to be. Officer Thornhill is retiring from the SRO position, as the school year comes to a close. The position, which started with Thornhill, will be terminated after he leaves. The Thompson Falls School Board voted earlier this year to not fill the position again. Chief Nichols expressed hope that the position will return, though the next occupant may have great shoes to fill.