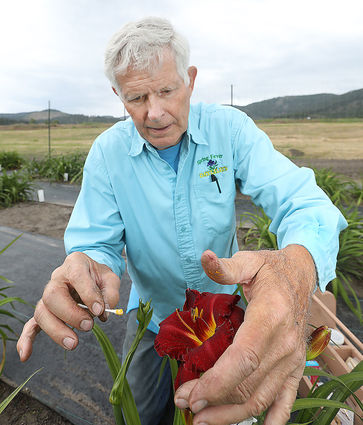 Ken McGann is no mad scientist working in a dimly lit lab, but he is continuously experimenting to come up with new and unique life forms — at least in the world of floriculture.

McGann and his wife, Mary, are the owners of Spring Fever Daylilies, located along Highway 200 about seven miles west of Plains, where they have nearly 500 daylilies of over 100 different varieties — including 30 hybrids of his own making. McGann uses a catalogue to order varieties of daylilies he wants to plant, but his real passion is creating his own flowers and registering them with the American Daylily Society, an international nonprofit organization.

He is the largest daylily grower in Montana and he’s now getting into his busy part of the season. And this is where his experimentation to fashion a new variety begins. McGann loves daylilies, but the chance to make a one-of-kind is even more exciting to him. “I like the fun of experimenting. It’s just like Christmas, you never know what you’re going to get. It’s always a surprise,” said the 77-year-old McGann, who started Spring Fever Daylilies 15 years ago, first with just a handful he got from Lynch Creek Nursery. His business grew from there and now he has daylilies growing in a half-acre garden and an assortment in his shade house. Daylilies are a perennial flower, which means it comes back year after year. Each bloom lasts for only one day, but each plant usually has several stems, also referred to as scapes, and each of them will have many blooms, which means the plant could stay in bloom for several weeks.

McGann’s work to fashion a new variety is not just sticking a seed in the ground and watering it. Before he even plants the seeds, he soaks them in peroxide water to get rid of any possible mold or bacteria. He usually plants seeds in February in his 32-square-foot basement greenhouse, where the only heat comes from grow lights and reflective emergency medical blankets attached to the walls. Once planted, he leaves them in the dark at 70 degrees for 10-15 days until he sees the first sprouts showing. Then he puts them under lights at 70 degrees during the day and 55 degrees at night.

Last winter he had planted more than 2,000 seeds there. He started transferring his young new plants from the basement to the outside garden in March, but it wasn’t until the middle of June when his mature plants started to bloom, which prompts McGann to begin placing pollen on selected flowers in hopes of creating another new species. “Hopefully, the stigma is receptive, that is, sticky on top where the pollen is applied,” he said. In addition, during the bloom season, which is busiest in July, he spends a couple hours a day collecting anthers — the pollen-bearing part of the flower’s stamen. He added that the pollen is easy to remove when it’s “ripe.”

McGann had an early pleasant surprise just two weeks ago when three flowers he pollinated four days earlier became “pregnant,” including one called “Corryton Pink,” the mother, and another he called “Wesley Emmert,” the pollen father, which is McGann’s creation. He said it’ll take 58 days to get a ripe pod, but when that happens he’ll have to be quick and nab the seeds before the plant shoots them out. There are times when he’s used the same parents and gets a different result.

During his pollen retrieval operation, he dries the new pollen and keeps it on Q-tips in plastic bags stored in a freezer throughout the winter months. Last year he extracted about 200 pollen samples. He likes to have 10 Q-tips of pollen for each variety, which he believes would fertilize five to 10 flowers each “I take the pollen when it is ripe and spreadable and then I rub the open pollen sack on the stigma when the stigma is sticky. That is when it is most ready to take the pollen to the ovary to make a seed pod,” said McGann, who added that because pollen is extremely small, there’s no way for him to know how many individual pieces he has on one Q-tip. McGann spent eight hours in two days last week pollinating 400-500 plants.

He doesn’t know how many flowers he’s grown since starting, but when making a new plant he looks for something unique, but it must be quality. He said only about 10 out of 1,000 are worth keeping. There are specific things he looks for in a quality flower, such as its color, edges, throat, dark green foliage, and re-blooming capabilities. Most of this year’s crop are re-blooms. “Many have 20 to 30 blooms on one stalk,” he said. One type of flower he’d like to design is a pure white bloom. He said that presently there’s no such thing, but he’s going to try.

“In this climate, I find that the seedlings usually do not bloom until the second or third year. And then, I still wait for another two or more years of evaluation before deciding whether to register the plant.”

His life with the daylily began in 2004, when he planted two clumps. “That variety bloomed the next June, they bloomed again in July, and were blooming the third time when the frost finished the season,” he said. He was allowed to sell some daylilies at the annual Lawyer Nursery Sale, where he worked for 39 years. “So here was a plant I liked, it was easy to grow and other people would buy them. It looked like a win-win situation,” said McGann.

He started making his own varieties soon after going into the business, but it wasn’t until 2017 that he began registering his creations, starting with four: “Gloria Gene McGann,” in honor of his late mother, “Knox Bobby,” “Bryler Anderson,” and “Markkaya Jean McGann,” a memorial flower named after his granddaughter. Now he has almost three dozen flowers with names like “Heaven Awaits You,” “Dally Girl,” and “Mary Flora” named after his wife. His favorite label, which was named by a friend, is “Gr8ful WAND” (WAND stands for “we are not dead”), which he registered with the American Daylily Society two years ago.

He doesn’t always name them himself; sometimes it’s done by a friend or relative. And not all of the fancy named daylilies in his place, such as “Indian Giver,” “Ice Carnival” and “Ladies Night Out” are hybrids he came up with. One of the varieties he sells — “Hyperion” — was registered in the 1920s, he said. McGann said it’s an historic plant, but not a big seller. McGann presently has about 400 varieties registered. He recently bought five plants from a nursery in Florida for just over $300 for the purpose of pollinating them with one of his creations to make a new different variety.

McGann has several favorites, but probably his top choice would be “Ray and Rosemary,” which he said holds its flowers up high for good viewing and is a hardy, sturdy plant. “It is also instant re-bloom, which means the second bloom follows right after the first. And it bloomed three times last year,” said McGann, who added that it has at least 20 buds per scape, and the plant itself multiplies quickly from year to year. His daylilies range in height from about 18 inches tall to the six-foot “Notify Ground Crew.”

The daylily king keeps meticulous records of exactly where each flower is located in his garden, in his basement greenhouse, and freezer, where he keeps his pollen in ziplock bags. His records include the given name of the plant and its parents’ names. For fully grown flowers, he also records height, first and last bloom, the number of buds, and even provides information about the foliage. Much of the information he records is sent to the American Daylily Society when he registers a plant.

Sometimes bees do the work for McGann by taking pollen from one bloom to another. He said it’s not ideal because he won’t know which plant is the father. However, he said that God, through the bees, have sometimes come up with new plants. “If bees put pollen on the stamen first, then the job is already done. If a seed pod grows on a flower stem without my tag on it, then insects have pollinated that flower. If that flower stem has my tag on it, then I claim it. And if I like the seedling after it blooms, then I keep it,” he said. “When that happens, I cannot repeat the cross because I do not know where the bee obtained the pollen. But I can still register the seedling if it meets my standard.”

For McGann, daylilies are not only a job, but a passion. “I guess I am a simple man. If one item can keep me busy and not bore me, then why have more different kinds of plants to figure out and have to buy specialty items for? One is much simpler. And there are so many different colors and styles of varieties of daylilies — it keeps it interesting,” said McGann, who has had no formal or extensive training in floriculture. He and Mary attended classes and seminars at the National Convention of the Daylily Society in 2007 and he learns from other daylily growers. He’s been a member of the society since 2005.

“In 2006, my first opportunity to plant the seed I had collected from the cross-pollinating I had done, I set up a growing chamber under lights in an extra bathtub. It worked well,” said McGann. “Sometime after that, one of my mentors was insisting that I needed to buy one start of a plant he had produced. I told him I could not possibly buy that plant because I was saving my money to buy a motel. When he asked why in the world I would do that, I told him I needed more bathtubs! He thought that was the funniest thing he had ever heard.” 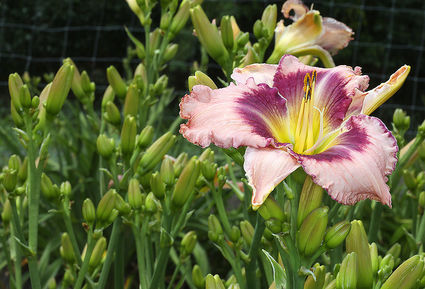 He sells about 500 plants a year. Spring Fever Daylilies is open 8 a.m. - 8 p.m. every day from May 1 to Aug. 31. The flowers are all marked with their name, blooming season, size, height, whether they re-bloom in a season or not, and there’s a picture that shows what the flower will look like. Plants are $15 and $25. McGann isn’t always there, but if people have questions, they can call 826-3214. Seventy-five percent of the customers this year had never stopped there before, he said.

In May, he donated 10 daylilies to Fort Benton for a landscaping around a statue of a dog named Shep.