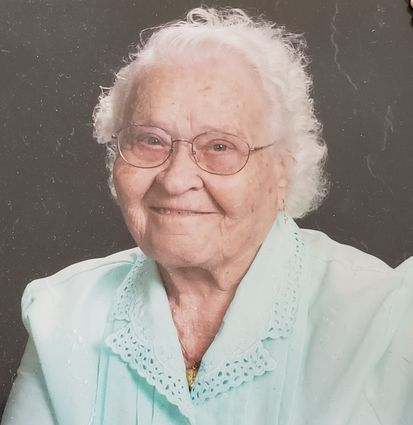 Ella Andersen (born Ella Reich) passed away in the early hours of July 8, 2020. She spent her last days with family and in her familiar home at Buffalo Hill Terrace. She lived a remarkable life and was cracking jokes even at 94. Her warmth, humor, and sense of perspective will be greatly missed by her family and friends. She was tough, smart, and adventurous.

She was born in North Dakota, the third oldest of eight siblings: Esther, Florence, Ella, Frieda, Gilmer, Milton, Reuben, and Rosemary. Her parents had immigrated there as part of an ethnic minority of Germans in what was then part of Russia, from along the Black Sea. Her ancestors had in turn moved to the Black Sea area only a few generations before, keeping their German language and religion as they went. Ella grew up speaking an old form of German at home and learned English at school.

When Ella was young, her parents moved the whole family to Hamilton, Montana. They all started out picking sugar beets there. They stayed for a while in the big barn where the beets were kept. Another family also lived there, on the other side of a sheet they strung up in the barn. Ella made it through eighth grade before leaving school to work.  She and her two older sisters went to work in the shipyards in Bremerton, Washington, during World War II, doing welding and riveting work for the war effort.

During World War II, as part of her church youth group, Ella started exchanging letters with a soldier named Walter Andersen. They connected, and when he returned to Hamilton, where his family also lived, it was a whirlwind courtship in person. They married shortly after Walt returned from the war, staying in Hamilton. Walt gave her the nickname "Shorty," and it stuck. She preferred to be called Shorty instead of Ella for most of her life.

In 1964, they moved to Thompson Falls, where Walt worked for the Montana Power Company dam. It took many generations, from Germany to the Black Sea, to North Dakota, to Montana, but Ella put down her roots. In one case, literally. Walt built her a house there in Thompson Falls that encircled two living trees, growing from the foundation through the house and out the roof. Her youngest son, his wife and their two sons, still live in that house. She had chocolate chip cookies and snacks ready for her grandkids any day they stopped by after school.

Shorty took huckleberry picking as serious business in the woods. She also loved going for drives along the quiet back roads. She and her family spent many happy summers cutting firewood to heat the house and picking huckleberries to make pies through the winter. Her pumpkin and apple pies were made with produce from the lovely garden around the house. You could always ask for some huckleberry jelly.

Montana is where much of her family still lives. Walter Andersen passed away in 1991, Ella decided to move to the Flathead. Ella was a member of Our Savior's Lutheran Church in Thompson Falls and Bethlehem Lutheran in Kalispell. She was, in many ways, a classic Lutheran of that generation. Civic engagement and taking care of family was a central way to show one's feelings.

She loved traveling once she started doing it in early retirement. Ella traveled internationally with her sisters and daughters on different trips. One of her favorites was a trip to the Holy Lands and the Middle East. She loved taking Mystery Tours - she was open to any adventure. There was so much to see that was interesting, and traveling with great company was always fun, no matter the destination. Ella managed to see so much in Montana, the United States, and across the world, during those years when she finally got to scratch that travel itch. She even came along as kind of a band chaperone to watch grandkids play in the Flathead High School band on trips to Disneyland, Seattle, and Edmonton, Alberta.

Ella cultivated a following of hummingbirds wherever she lived. In Thompson Falls, she was known to be able to put up a hand and have them land on her finger, they trusted her so much. She was a masterful quilter. She made a special quilt for each of her grandchildren as an heirloom. Quilting combined her skills at precise handwork with a kind of mathematical challenge in spatial rotation, and the end product keeps people cozy.

She cooked many meals for extended family in Thompson Falls over the years. Feeding people was a main way she showed you she cared. In Kalispell, she discovered many great restaurants. Going out for lunch or dinner with kids, grandkids, and great-grandkids as they came to town was a favorite activity. There was so much good food to explore and she didn't have to do all the cooking herself- finally!

Those family members benefited from her listening, her understated support, and her down to earth approach. She wasn't going to sugarcoat things for you, but she was also on your side, cheering for you. She was proud when you found something that made you happy, even if it wasn't a normal path you wanted to walk. Grandma Shorty welcomed many new people into the family over the years as people got married and had children. There was room in her heart for everyone.

She is survived by all four of her children: Mary, Shirley, Vic and Dan, and their spouses Gary, Barb and Jeri; her grandchildren, Ron, Janice, Joanne, Melanie, Brad, Holly, Jacob, Derek and Lucas; and her 16 great-grandkids ranging from age 7 to 28.

In lieu of flowers, please consider making a donation in her memory to your local food bank.