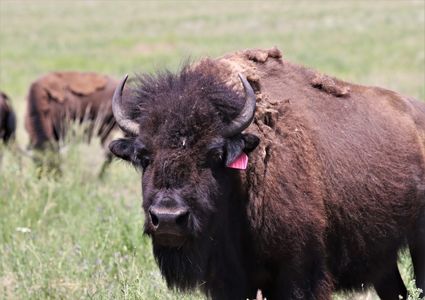 NATURAL HABITAT - Roam Free Bison Ranch outside of Hot Springs is home to a herd of about 150 bison. The ranch encompasses more than 10,000 acres, some of which is leased from local landowners.

"No matter what side of the fence you are on, most people in the west have a picture of a bison on their wall," said Jon Sepp, owner of Roam Free Bison Ranch, just outside of Hot Springs. When saying this, he was referring to people who live in the west, and especially ranchers. Sepp said there are two opinions of farming bison. One group is against the large beasts, saying that they are aggressive and difficult to work, while the other believes that they are better for the environment and smarter than cows. As Sepp put it, the American Bison is the symbol of freedom and the American West and everybody, no matter their view, thinks of a bison when they think of the wilds of America. So why not ranch them?

Currently Sepp owns and runs a ranch with three full-time staff and several volunteers throughout the year. What started as just a few acres and nine bison has turned into a herd of over 150 bison on a ranch that spans more than 10,000 acres, some of which they lease from local landowners. The ranch sells several flavors of bison jerky, which they have processed in both Wyoming and at Clark Fork Valley Meats in Plains. They process over 100 bison a year and produce about 20,000 pounds of bison jerky during that time. They accomplish this with the help of affiliated ranches that farm bison in the same wholistic fashion that the Roam Free Bison Ranch has established. They also sell the bison skulls and hides, which are processed by a John's European Mounts in Charlo.

The team is working to build infrastructure on the ranch, which will need miles of fencing to help move the bison around. This fencing is being used to imitate the natural movements of a herd that was traditionally routed by wolves and other large carnivores. The fencing being used is electric and has enough power to put down a man. When defending against creatures that can weigh over a ton, the power has to have some punch. According to Sepp, bison are extremely intelligent, and it usually takes only one jolt for the bison to get the idea. Sepp said that a lot of the time the ranch will leave the fence off because the creatures will not even try to test their luck, after the first attempt.

It was a childhood dream of Sepp's to work with and own a bison ranch. Much of his adult life he has spent saving for that goal. Sepp moved around a lot as a kid, as his father was in the military, and at one point, Sepp lived in Norway. This, according to Sepp, is what led him to love the wild and less populated places like Montana. Sepp himself joined the military, attending the Air Force Academy in Colorado Springs, Colorado. He eventually worked as a commander in parachute testing, and oversaw the evaluation of parachute designs, both for individual fall arrest systems and chutes for larger objects like vehicles and even rockets.

While he did that, he lived in a trailer on the flight line in order to save money for his ranch. Finally, in 2014, his dream became a reality. Sepp purchased some land and some animals near the east end of Sanders County. The road to success however, was and is still ongoing. He worked another job to help keep the ranch afloat and one day got close to selling it off. Enter his fiancé, Brittany Masters. After meeting her in Washington on a job, Sepp invited her to come out to see his ranch. Masters immediately fell in love with Montana and the ranch and told Sepp that they could make it work. Masters left her job as a brand director for Boeing, after helping launch their new 777 aircraft, to put her public relations and marketing skills to work for Roam Free Ranch.

The team started with jerky because it is easier to produce on a large scale and because it utilizes many different parts of the animal. Otherwise, if the ranch jumped straight into producing meat, they would have had to start with a much larger volume of animals in order to produce enough of the cuts people desire. They also selected jerky because most people want to try bison first before investing into a more expensive meat. Jerky provides a low-cost way to introduce the wary consumer to the taste of bison. This year, the ranch will be selling fresh meat through several grocery outlets. They provide jerky for Yellowstone National Park and online, as well as at Dillard's, before the COVID-19 outbreak, and will be selling fresh meat at Huckleberry's Natural Market hopefully come winter.

Another goal of Sepp's is to help work and care for the land. The Roam Free Bison Ranch is more than a ranch; it is also an ecological experiment. Bison work the land in a different way than cattle and were in fact the original shapers of the great plains. Bison rubbed against young trees, keeping the spread of forests down, and dug up the land with their toes to aerate it, rather than compressing it as cows do, Sepp explained. This allowed for numerous varieties of grassland to develop and created an environment for hundreds of species. Bison also eat grasses in a different way. Many types of non-native grasses were introduced into the west to aid in feeding cattle, especially during the winter months. The snow can compress native grass and bury them to the point where cows cannot reach them. A Russian grass was brought in that grew tall and reached over the snow to help cattle survive the harsh winters of the northwest. Bison, on the other hand, are less picky and built for the American climate. Bison carried vast amounts of seed in their fur from one corner of the country to the other and fed on the plains limiting growth in the amounts of millions of animals. This created a natural "fly-way" for migratory birds to travel up and down the length of the country. Sepp is working his herd to return the land to its natural state, using the animals that made it that way.

Though bison were not originally native past the Rockies, the concept is an experiment with grander repercussions. Sepp, and ranchers like him, are working to formulate a ranching system that can restore and maintain wild places for generations to come. In doing this, they are also guaranteeing the survival of the bison, which were saved originally by ranching. Because of a few small herds saved by optimistic ranchers, the national animal for the United States narrowly avoided extinction.

Sepp and Masters are working to become a part of the economy in the county, and according to Masters "Sanders County is a great place to have a family business." She noted that the area is flexible to businesses, allowing them to work how they want. Both Sepp and Masters agree that they want to produce a premium product and for an affordable price, especially compared to the high price bison meat can bring as a novel commodity. "We want to have something that is super premium quality that the average consumer can afford to buy," Sepp said. 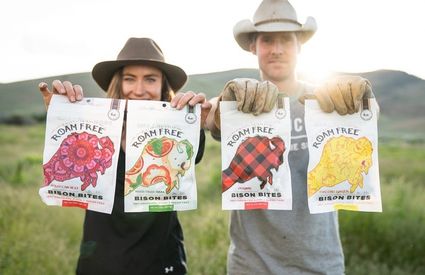 TASTY BITES - Jon Sepp and Brittany Masters display a variety of their Roam Free Bison Bites, made with bison raised on their ranch.

Both Masters and Sepp bring a "health food" approach to their business, speaking often about the health benefits of bison meat, which is higher in protein per weight than nearly any other kind of red meat. According to Sepp, bison is also leaner than beef. He said that the Roam Free bison are bred and fed as naturally as can be done, and the process of moving them and grazing them on grass, instead of feed, produces a far healthier and more wholesome product than many other ranches can offer.

Eventually, Sepp and Masters would like to grow the herd and influence other ranchers to follow the same grazing patterns as they do to promote a healthier ecosystem in the west. Roam Free Ranch also wants to one day provide Fresh Bison meat to more places, along with their jerky line. They would also like to begin selling their product locally. Roam Free Ranch can be found at goroamfree.com or on Facebook at Roam Free Bison Bites and on Instagram at @goroamfree.