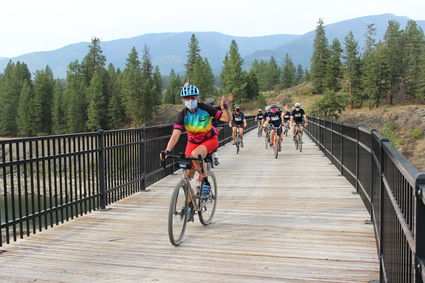 On her 550-mile ride through the seven counties of District 4, Monica Tranel, a Missoula Attorney running to become the district's next Public Service Commissioner (PSC), made several stops in Sanders County last weekend, to meet the people she will be representing should she win the general election on November 3. Tranel advanced from the Democratic primary on June 2 and wanted to find a way that allowed her to dive deeper into knowing her district.

Susie Orr, a close friend and volunteer for the campaign, created a blog titled: Along for the Ride that will document Tranel's journey. It was Tranel's, "love for biking and planning," that led her to the decision to hop on a bicycle to discover the back roads while meeting the people along the way, according to Orr's blog.

Tranel's bike trip through Sanders County, began on Saturday morning as she made her first stop in Noxon. A scheduled meet-up allowed supporters to bike with Tranel across the Noxon Bridge to Pilgrim Park. She then made her way to Trout Creek for another meet-up at the Lakeside Resort and she ended the day with a final gathering in Thompson Falls at Power Park, where people could join her in a ride across the High Bridge.

Nearly a dozen people showed up at Power Park in Thompson Falls to join Tranel in the ride across the High Bridge. As the group assembled at the park, Tranel took the opportunity to chat with each individual before their excursion through town.

"I needed a good way to tell people what PSC is," Tranel said. "I wanted to do a rowing event out on the water, but then COVID happened; so, I needed to do something more appropriate for social distancing." That's when Tranel opted for her next idea, to bike through the district. "It's a good way to get out to meet the people in the area I'm going to represent," Tranel said. "There's so much you get to see on a bike that you don't see in the car."

As a PSC, who regulates private, investor-owned natural gases, electric, telephone, water, and private sewer companies who do business in Montana, Tranel reveled at the chance to meet people. "I will also get the chance to learn the realities of the area I will be representing as PSC," Tranel stated. "PSC deals with a lot of real-world issues."

Tranel's journey through Sanders County continued on Monday with a visit to Paradise School, and one last meet-up in Dixon. "I have a real desire to know the district, and meet the people in it," Tranel expressed. "That's why I'm doing this."