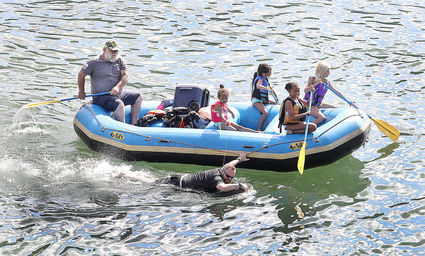 A LITTLE HELP – Dave Williams, founder of Operation Joint Mariposa, paddles his raft over to Sam Redfern, founders of United States of Hope, on a body board, to help him get out of an eddy near the beach in Paradise during the Veterans & Family Freedom Float.

The United States of Hope teamed up with Joint Operation Mariposa and VFW Post 3596 for the first Veterans & Family Freedom Float on the Clark Fork River from Paradise to Plains.

Thirty-eight men, women and children loaded into a flotilla of inflatable rafts, kayaks, canoes, and four-foot...