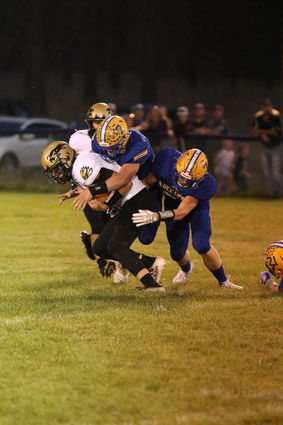 It's not just COVID-19 now; it's also this blasted smoke.

Already battling the impositions instituted by the implementation of COVID-19 rules, coach Jared Koskela and his No. 4 ranked Blue Hawks were left wondering if they would be able to host the Darby Tigers later this week. The Hawks moved to 3-0 on the season with a 52-0 thrashing of Seeley-Swan at Previs Friday.

For their part, the Tigers defeated Victor 30-22 in Darby Saturday.

Unhealthy levels of wildfire smoke from numerous blazes burning all over the western U.S. have settled into Montana's valleys, making breathing, let alone exercising and competing, challenging. Prep football teams in the Big Sky Country have been forced indoors for practice this week. And it's hard to predict when the smoke will clear.

"We will play in Darby if we have to, I hear the air isn't nearly as bad in the Bitterroot," Koskela said. "We will see what happens but would really like to get this game in."

Before the smoke arrived, the Blue Hawks caught fire on their own against Seeley, quickly moving out to a big lead and adding to it liberally thereafter on the way to the easy win. The Blue Hawks led the Black Hawks 22-0 after one quarter, 38-0 after two and the clock was running throughout the abbreviated second half.

Kade Pardee led the Thompson Falls march into the Seeley-Swan end zone with four touchdowns on the night, scoring on runs of 16, two and 20 yards, in addition to catching a 30-yard TD pass from Roman Sparks. 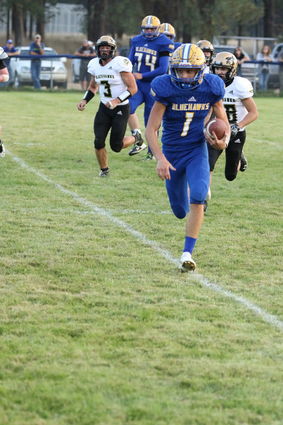 ROMAN SPARKS makes a dash towards the end zone. Sparks threw for two touchdowns and ran for two more during the Blue Hawks' 52-0 win.

Sparks added to the point total with touchdown runs of six and 16 yards, besides throwing scoring passes to Derek Andersen (41 yards) and to Pardee.

Pardee finished the night with 141 yards rushing and another 30 receiving, Sparks gained 40 yards on the ground, Nathan Schraeder 17 and Jordy Fisher seven. Schraeder caught one pass for another 12 yards.

Dane Chojnacky dominated the line for the Hawks defensively, pulling down a team-high 14 tackles, with four for a loss, one quarterback sack and a forced fumble.

Pardee snagged an interception and Thilmony recovered a fumble.