Highway markers a reminder of tragedies 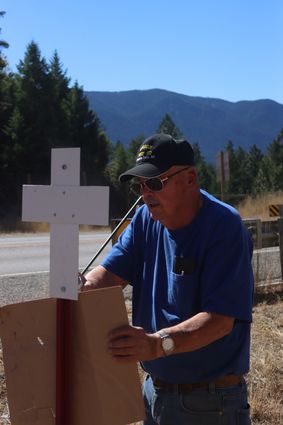 In 1983 two men were driving westbound across the Highway 200 bridge over the Thompson River, just east of Thompson Falls, at around midnight. The driver, 23-year-old Raleigh Smith, accompanied by a friend, 20-year-old Christopher Otto, suddenly swerved and drove into the embankment, rolling the vehicle which collided with a tree. Smith, who was a former rodeo champion from Cut Bank, died instantly, and his friend was rushed to the hospital.

After the wreck, a highway marker was placed on the side of the highway next to the bridge. These markers are placed and maintained by the local American Legion posts across the state. In 2016, the bridge was rebuilt and the cross was removed and never replaced.

The cross placed there was to mark where someone had died and to "remind people that this might be a dangerous area," says Bill Beck, with the Thompson Falls American Legion Post 52. Beck is one of several legion members who maintain these markers throughout Sanders County. Post 52 covers from Highway 28 just east of Plains to the Idaho border. Then they cover Highway 56 up until the Lincoln County line and up Prospect Creek Road until Idaho. The American Legion in Paradise handles the county crosses from that point on Highway 200 to the other county borders.

Each cross has to be a specific size and the post must also conform to specifications. The posts must be delineator style posts, and the ones the legions use, at least in Sanders County, are recycled from old highway posts that cannot be used for signage after being removed. They are cut to size and painted red. The refurbished and reused signs are used to replace old cross posts as well as for all new ones. According to Beck, most of what they do is replace tarnished crosses in disrepair and have done several over the course of his time with the legion.

Beck gets his supplies from Jim Kelly in Missoula, who is in charge of the markers. When an accident happens, either the state or the family will get in touch with him and he will send out a message, statewide, to the legions who will then take it from there, if the death happened in their area.