Horsemen look ahead to Mission 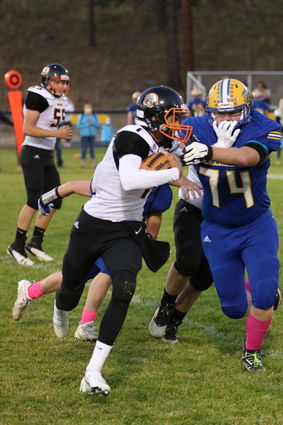 Plains coach Eddie Fultz's idea of an ideal football situation is a roster comprised of an even mix of classes, with roughly equal numbers of freshmen, sophomores, juniors and seniors.

What he has this season with the Horsemen is nothing like that.

"We have six seniors but two of them never played football until this season," Fultz said, "and we have only one junior. It makes it kind of tough when you don't have that upperclassmen component to your roster, especially in football."

A few early-season suspensions also didn't help the Horsemen's cause earlier this fall.

"Mission has a good mix of experience and youth," Fultz said. "They have a good young quarterback and like to spread out the field passing to set up their run game."

The game with Thompson Falls went the Hawks' way early and the 35-point rule was in effect by halftime.

"Thompson Falls is very strong up the middle, their line keys their defense and the linebackers clean up after them," Fultz said. "We had some trouble matching up."

In spite of the mismatches, the Horsemen never gave up and wound up being only the second team (among six so far) to score on Thompson Falls this season.

Quarterback Tristan Subatch completed a 15-yard touchdown pass to Tucker Foster for that Plains touchdown in the second half.

Foster, who has accepted a football scholarship offer from Western Montana for next fall, was the Horsemen's main man in Thompson Falls, Fultz said.

"Tucker is a load, he was taking his man out of the play with his blocking on every play," Fultz said. "He is an example of what a kid who plays all four years looks like, he has been our team leader, the one our other kids look up to."

Fultz's other four-year player for the Horsemen, Gavin Regalado had a good game, in spite of announcer Jase Miller pronouncing his name at least seven different ways during the game. Regalado picked up 70 tough yards rushing to lead the Plains offense. Foster finished the game with 37 yards receiving.

Regalado and Foster also led the Horsemen on defense, seeming to be in on or close to every play that was made.