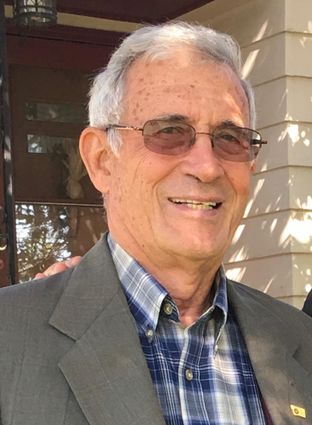 Hal Vosen passed from this world after a brief illness compounded by a fall which injured his neck and spinal cord. A memorial service is scheduled for noon Saturday, October24, 2020, at the Heron United Methodist Church in Heron, Montana, under the direction of Pastor Bill Warren. A graveside service is planned for July 2021 at the Heron cemetery. Those who knew Hal/Clayton appreciated his twinkly eyes, his love of people, his good humor, his kindness and his willingness to spend time working on community projects. His life of faith, family and service leaves a priceless legacy behind and we treasure his memory.

Harold Clayton Durham Vosen was born in southern California in the spring of 1940. His family with baby sister Phoebe soon moved to the Heron Montana area. As a child he went by his middle name, Clayton. He spent his early years in a log cabin in the green forests of northwestern Montana surrounded by his maternal family and cousins. After World War II, his family moved to Spokane where his sister Rosemary was born. He attended Grant School and Lewis and Clark High School in Spokane graduating in 1958. At the University of Idaho in Moscow he majored in forestry with a minor in rangeland science and began using the name Hal. After graduation, he began working for the Bureau of Land Management (BLM) and joined an interdisciplinary field mapping team.

In 1965 Hal married Lynne Christine Patton of Spokane, Washington. They began their married life in Jordan, Montana, and moved to Denver, Colordo, Farmington, New Mexico, and finally Malta, Montana, where they had three children, Christina, David and Victor. In Malta, Hal joined the National Guard and a Toastmasters speaking club. His job took him to Havre in 1976 where he celebrated his 40thbirthday with a new title, Major Vosen. In 1980 he moved the family to Miles City, Montana, where he served as a range conservationist until his retirement in 2000. With this relocation Hal was transferred to the Army Reserve Armored Cavalry division and retired from the military in 1991.Though Hal was often gone especially in the summers due to various commitments, he remained supportive and active in community, church, and family activities. He loved music, gardening, hunting, fishing, a good softball game, talking with people and battling noxious weeds wherever and whenever he found them. In 2006 Hal and Lynne retired to the Heron area. He was broken-hearted when his wife Lynne succumbed to cancer in 2014 after 49 years of marriage.

In 2015 Hal met and married Carol Bailey. They made their home in Heron and Priest Lake and travelled the world and the US. They shared a love of hot springs, college football and the Seattle Mariners. Hal and Carol recently celebrated their 80th birthdays and fifth anniversary.

Hal's gifts to his family, friends and community of time, knowledge, thoughtfulness, humor, peacemaking and kindness will be sorely missed. Love you to the moon and back, Papa! Memorials can be made to the Heron United Methodist Church, Heron Senior Community Center, Heron Library or the charity of your choice. The family thanks the many medical personnel who kept their focus on Hal's care and healing during these difficult times.

Family and friends are invited to sign the online guest book for Hal at coffeltfuneral.com. Final arrangements are under the direction of Coffelt Funeral Service.